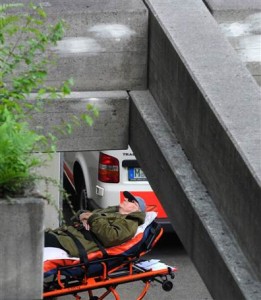 Former Ohio mechanic and Nazi camp guard John Demjanjuk has been sentenced to five years in a German prison for his role in the murder of almost 28,000 people in Poland during WWII.

At 91, he was so sick and fragile that he could barely sit up for his own trial. His attorneys maintained that while the Ukrainian-born Demjanjuk may have served as a guard, he was a victim of war crimes himself and shouldn’t be held responsible for the mass killings that took place under his watch. He was just low-level stooge, after all.

He’s probably telling the truth about being a grunt. This isn’t the first time Demjanjuk has been brought up on charges: Nazi hunters found him near Cleveland in the 80s and extradited him to Israel to face accusations that he was “Ivan the Terrible,” the notoriously sadistic psychopath who did horrific things like slice off women’s breasts at the Treblinka death camp. He was convicted based on the testimony of five eyewitnesses and sentenced to hanging, but a few years later evidence surfaced that cast doubt that he and Ivan were the same person and Israeli Supreme Court overturned the conviction.

But just because Demjanjuk wasn’t at Treblinka doesn’t mean he’s innocent. In 2001, more charges about his participation in killings at the Sobibór, Majdanek and Flossenbürg camps were brought up and a new trial was ordered, this time by Germany. It’s taken 11 years to get him back out of Ohio, across the ocean and into the courtroom to determine that yes, this old man was once a kid soldier who saved his own life by working as a cog in the Nazi extermination machine. He was there, he followed orders, he did nothing while people were tortured and killed.

Now some people, probably people who aren’t Jewish and didn’t grow up in a Holocaust subculture where you learned that much of your European ancestry was stripped of its wealth and dignity and sent to gas chambers, are saying “Aw, what’s the big deal; he’s almost dead anyway. Leave the old man alone. Forgive and forget already.”

And I say: I believe that forgiveness is the only true way to heal the soul. Yes, the crusty bastard is seriously ill and probably very sorry about the hideous nightmare of Eastern Europe that took place almost 70 years ago. But forgiveness does not mean giving up screwing down responsibility where it belongs. Simon Wiesenthal and the rest of the Nazi hunters have tirelessly scoured the entire globe to bring these criminals into justice’s light and will not stop until they’ve found them all or scared the rest into a life on constant paranoia and diarrhea.

Considering the nature of the crimes, being strung up in the town square by your old man ball sac wouldn’t be viewed as inappropriate in most cultures during the history of the world. Demjanjuk’s pissy five years isn’t such a big freakin’ deal, and he’ll probably die at home before he even rolls into prison. It’s a symbolic show to allow us closure and let God deal with what comes after.

So forgiveness, yes. But we’re sure as f*ck not going to forget.

This story of the Holocaust is almost over, but it will continue to be told in spite of the revisionists, the haters and the liars. Almost everyone who was there—who lived through the most heinous hell-on-earth any of us can imagine—is gone. Every year, there were be less survivors to share their firsthand accounts at our Yom HaShoah commemorations. One day, all the perpetrators will be dead, too.

But you and me will still be here, and our children, and God willing, theirs. And we’ll have to shoulder the task of remembering the truth of what happened, even though the young people will roll their eyes and complain that the world is different now (except that it’s not; anti-Semitism is on the rise in Europe like some dystopian sci-fi novel.) We ain’t NEVER FORGETTING that when our grandparents (and in some cases, parents) were kids, a third of the world’s Jewish population was destroyed because of charismatic meglomaniacs and low-level grunts and apathetic neighbors while the rest of the world went about its business, and that it wouldn’t take much for it to happen again—not just to us but to Tutsis or Tamils or Sudanese or any other people. If we forget, even for a single minute, we’re leaving the door open.

Justice cannot arise or prevail without vigilance, and that must be our promise from generation to generation.

6 thoughts on “Justice Better Served Late Than Not At All”