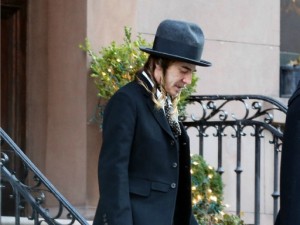 Remember ol’ Mr. Mean and Nasty John Galliano? You know, the fashion designer who was on top of the gilded world until he was caught on video gabbling about how much he loves Hitler?

No, not really. But to make his grand public reappearance at the Oscar de la Renta show at Fashion Week, he donned the garb of a Flatbush yeshiva student — complete with peroxided peyes.

WTF, you may wonder, as you should. As many did. However, there are some who believe Galliano is just misunderstood.

New York Post fashion editor Serena French defended Galliano, writing that he draws inspiration from the world around him. She pointed out that in 2000, the white hot designer launched a line based on the homeless people he observed having a wonderful time eating out of garbage cans and otherwise freely gallivanting around Paris.

“In his own way, he was attempting to show sympathy and a connection with the very people he has offended,” explains French, with the same logic one might use to justify the presence of little girls’ panties in the possession of a child molester.

But the most shocking defender of Galliano’s painful sartorial choices last week had to be ADL president Abe Foxman. I would have expected ol’ Foxy to snatch the hat off Galliano’s head, smack him in a face with a glove and shout “Shanda!,” but no — apparently, the Super Stylish Anti-Semite and the Man Who Is So Sensitive to Jewish Stereotypes He Lambasted Seinfeld’s Soup Nazi Character are BFFs now:

“[Galliano] has spent hours with me and with others in the European Jewish community, including rabbis and Holocaust scholars, in an effort to better understand himself and to learn from his past mistakes,” Foxman said in an ADL press release. “He is trying very hard to atone.”

Fine, Jonny. But atone by writing a check to the ADL and fasting with the rest of us at Yom Kippur. And leave the blue ascot at home, nu?