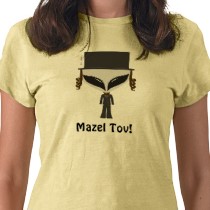 This morning I was reading in the UK’s Jewish Chronicle about Footsteps, a Chasidic “recovery” house in New York where those who have left sheltered religious communities get schooled in the ABC’s of secular life:

Footsteps was set up in 2003 by Malkie Schwartz, a young woman from the Lubavitch community who, in the process of becoming secular, realised how much support others in her position needed. It provides career and college guidance and training in basic computer skills. It also provides peer support meetings, social events, and a library and computer lab.

I never really thought about it, but I imagine it would be incredibly difficult to go from living in an extremely protected, observant environment to navigating the world at large. Even though I share Old World DNA with its followers, I have to say Chasidic culture often seems foreign to me, and while I respect the emphasis placed on family, I think it’s bunk that some women need permission from their husbands to do things like go to college or, say, wear pants. I admire things about my many observant friends’ lifestyles, but I can certainly understand why a person raised in an environment with so many rules might want to live a different kind of life.

Footsteps definitely offers training in cornerstone skills to set oneself up for success, and I deeply respect the courage it takes for a person to leave their loves ones. It occurs to me that with my unorthodox background and heretical attitude towards most things rabbinical, I might be particularly suited to helping these Chasidic rebels adjust to life outside the eruv. So I’m thinking of developing a curriculum called “Becoming a Bad Jew 101” which would include sections such as:

* Burn the Sheitel And Let Down Your Hair
* Chicken Parmesan: Go Right Ahead, ‘Cause Hens Don’t Lactate
* How to Shake Your Lulav At the Club
* Borscht: Just Say No
* Men and Women Together In Synagogue: It Won’t Cause Spontaneous Combustion

Snarky, I know. But I get the feeling those Chasidic rebels will do just fine as long as they keep their senses of humor sacred.

A lovely Shabbos to all, however rebellious it may be!

2 thoughts on “I Could Be An Adjunct Professor”