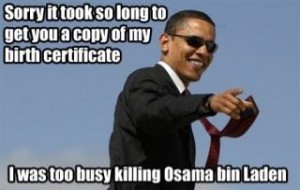 Frankly, the most nonsensical part of the whole “birther” debate is the moniker—who gave these idjuts the right to call themselves such? Now that the whole stupid issue has been put to rest (along with Osama Bin Laden, holy moly!), I have decided to reclaim and redefine the term as such:

A “birther” is heretofore only to refer to someone who HAS ACTUALLY GIVEN BIRTH.

You know a few of them. Sometimes they are referred to as “breeders” or “that crazy lady wielding the spatula” but they are best known as “mothers.” And this Sunday they—ahem, WE (seeing as I am sometimes the crazy lady with the spatula)—would like a little acknowledgment and appreciation of not only the whole birthing episode that got you here (which, by the way, wasn’t actually all that pleasant) but the feeding, cleaning, tushy-wiping, working to pay for camp dues and endless other thankless tasks. (Of course, not every mother is a birther—thank you one of my favorite mothers, Hilda Hayes, for the reminder!)

Some mothers preferred to honored by everyone getting all farpitzed and going out to a nice brunch; some of us just want to wake up to a sparkling clean kitchen and duct tape over the childrens’ mouths to prevent bickering. Flowers are nice, but personally I just want to take in a matinee of Fast & The Furious 5 and eat frozen yogurt for dinner.

Since my own mother lives too far away to subject to two hours of Vin Diesel, I’ve gotten her something I know she’ll love. It’s not a tsotchke or a box of chocolates since she’s always trying to get rid of stuff (she made me bring an empty suitcase on our last trip) and doesn’t do sweets. But she’s an amazing and generous lady who loves helping people, so every year I do just that, in her name: 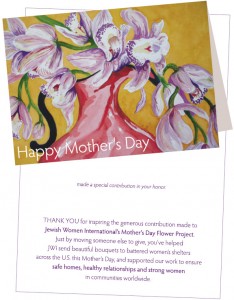 For the price of a dozen roses, Jewish Women’s International Mother’s Day Flower Project sends a beautiful card to your mama and makes a donation to one of 200 battered women’s shelters across the country. The gift raises the spirits of the 30,000 women (and more than 15,000 children) spending Mother’s Day in a shelter—a place no mother wants to be unless what’s at home sucks pretty badly—and helps JWI do their work of educating communities about domestic abuse and empowering women to create safe homes.

Each year JWI features a different artist’s work, and j’adore Sabine Wohlfeiler’s “Orchids” gracing the cover of this year’s card. Check out the sweet video here and click to buy a card—better do it fast if you want it to be on time. (But your mother will understand if it’s a little late, seeing as the intentions are so good and all, right Mom?)

2 thoughts on “Honor the Birther in Your Life”