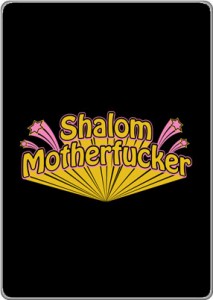 This may come as a shock, but I’ve gotten very few negative emails at this blog over the years, in spite of my spirited attempts to alienate everyone:

I love Jewish ritual, but I’m unwilling to pick a religious denomination because I feel unfilled at synagogue. I make a kick-ass parve chopped liver, but I don’t keep kosher. I love Israel and support the Jewish state, but I remain ambivalent about its government.

If you’re traditional Jew, you likely think I’m a heathen. If you’re a super-liberal Jew who needs to apologize for Israel, I’m not on your team either.

This blog is six years worth of documentation of a loud and proud and extremely lazy Jew. I don’t think we’ve got more or better answers about the Great Unknown than anybody else. Following the literal laws in the Torah doesn’t call to me. I don’t like rules or obligations. I shun serving on boards and committees that don’t involve food. I quit teaching Shalom School kindergarten, for cryin’ out loud. I’m not fundamentalist about too many things, other than my kids will be having b’nai mitzvot and there will never be a Chanukah bush in this house (but twinkly blue lights are OK.)

So this message from a person with the name “magnetic” is a bit mystifying. I left the punctuation and spelling as is, even though I really wanted to correct them as I’m much more fanatical about grammar than I am about religion. I’ve broken it up with my comments :

Hello
You are not going to enjoy this email, so if you are not open minded
enough to actually think then delete it NOW.. ok you are still here?
I’ll make it brief

1. I’m not in a militia
2. Im not southern
3. I’m not brainwashed jesus freak

Huh. OK, that still leaves “mental patient,” but go on.

i’m a very educated thinking person. I have copies of the Torah,
Qu’aran, Bhagavad Gita, Bible, Book of the Dead, etc etc etc and have
read them all. I had a minor in theology @ Umass.

Pretty sure your major wasn’t English.

You really should get a life and learn to be something other than a
“jew” and gear your entire life towards zionisitic extremist behaviour
and dipping yourself into jewish indoctrination any chance you get.

Whoa…First of all, this blog is all ABOUT a life geared towards a million things—my juicy, child-full, demented mother-in-law caring, spiritual niche-seeking, Southern by marriage, yoga-obsessed, kabbalah-curious, church-visiting, bike-riding, chicken-raising, idea-considering, awesome life—so clearly, I HAVE ONE ALREADY. I am many, many things “other than” a Jew. It’s an important part of me, but apparently, not nearly as important as it is to you.

I’m not sure what “zionistic extremist behavior” is but I can honestly say I barely have time to trim my toenails, let along engage in anything extremist. And if I’m doing any dipping, it will likely have more to do with intoxication than indoctrination, thank you.

As much as someone like you cries and complains and yellls out when
somebody makes anti jew remarks, you really should contain your veiled
contempt for all non jew. Especially Muslim and Christian belief
systems. People like you who indoctrinate young jewish children with
this crap are part of the reason why many so called “gentiles” do not
like Jews.

Yup, you’re damn f@*king straight I’m going to call out when someone says something anti-Semitic—or racist. Or sexist. Or insensitive. And if I have PMS, just plain stupid. I’m far too lazy to have hard feelings towards too many folks, and I tend to save my deepest contempt for the willfully and woefully ignorant. Believe me, if you think it’s too veiled, then I promise to be more unambiguous in the future.

I have no argument whatsoever for any belief system, only for people who distort holy words to justify violence against those who do not think like them. The only “indoctrination” my children receive is to interact with the world from a place of service, tolerance, understanding and kindness.

I’ve often wondered why the world has disliked Jews to the point of massacre so many times during human history, but I’m almost positive that I shouldn’t take it personally. Perhaps you should start writing letters to people who fill their children’s heads with hatred and their hands with guns?

Why dont you work on yourself more instead of just basing your entire
identiy, ego, and superego on being “jewish” which is in itself a
subjective term.

Well, we finally agree on something, Mr. or Ms. Magnetic! Being Jewish IS subjective—it’s truly a complicated term, one I’ve struggled with over several thousand navel-gazing posts on this blog, which I suppose could be considered “working on myself.” It’s sure as hell cheaper than therapy.

I don’t try to define Judaism so much—it makes my brain hurt. It’s more than a religion, since you don’t have to practice to be Jewish. In spite of shared DNA, it’s not a race, as so many vile hacks have tried to prove, since you can become a Jew by studying the Torah and adopting Jewish values. It surely is a heritage and a culture that I am proud to identify with and honored to pass to my children as their own.

Oh, and I don’t base my entire identity on anything—I’ve done far too many drugs to depend on just one of the many voices rattling around my psyche.

I mean really do you do ANYTHING other than expound
on being jewish and furhtering jewish political and religous rhetoric?

Yes, Magnetic, I do; see my answer to your first question. This blog, however, is ABOUT what being Jewish means to me, which I know a lot more about than say, golf. There are those people in the world who make a living at and have a passion for promoting Jewish and Israeli ideals (two very different things, actually); I will happily to concede to them while continuing on my own personal Jewish adventure.

Magnetic, I am awake, eyes wide open, a soul in a body that’s given birth to two other amazing souls growing in bodies. I am in awe every day of the breadth of Creation, all the the colorful and ingenious and leafy green and adaptable and curious ways life manifests. I was born into a Jewish family that taught me about a history of a people that has remained steadfast in its faith and commitment to making the world a better place. I’m continually reminded that I have so much to learn about the world—and that each of us has the responsibility of reconciling our individual experiences and our judgments with what IS.

I’m not sure if this was a form letter you send to “Jewish bloggers” to try and disturb their equanimity or just a misspent, mispelled use of your time, but if your goal is to convince me to renounce Judaism for whatever you’re selling, I must tell you that you have a lot more work to do. Maybe get some more sleep?

4 thoughts on “Fun with Hate Mail”