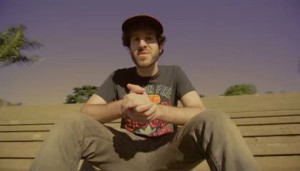 Thank you, Jewlicious, for giving me something to smirk about on this ever-so-gloomy Monday: Lil Dicky‘s epic rap battle with Hitler.

(For you sensitive types, please be warned that “Jewish Flow” contains egregious use of Nazi symbolism, prolific drug use via a gas mask bong and many instances of the word “vagina” to make a feminist cringe.)

What do y’all think: Is his mother proud or sitting shivah for this shanda? On one hand, I am fist-pumped-up for a Jewish rapper to take down the ultimate muthaf*cka with his hilarity, no matter how obscene.

Then again, it gives me the creeps to hear it from a kid who looks way too much like my son’s camp counselor.

Still, the boy is funny. From his blog:

In an era where rap is dominated by racial, social, and economic minorities, LD decided to put the upper-middle class on his frail, Jewish shoulders.

See? Underneath the rapper’s bluster, his liberally-educated, revolutionary-minded, suburban tush shines through — a right nice Jewish boy in a world with ever-worsening morals and tastes. If Lil’ Dicky is the future of Jewish hip-hop, I’m ok with that.