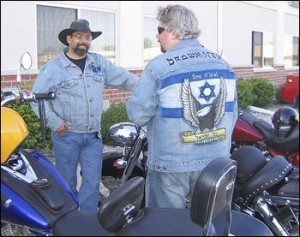 From the press release:

Get your motors running! At 9:30 am on Friday, May 15th, more than 200 Jewish motorcyclists from all over the United States and from places as far away as Israel, Australia and Canada, will depart from the Jewish Educational Alliance (JEA) on their fifth annual Ride to Remember. The ride, a fundraiser for Holocaust remembrance causes, will travel from Savannah to Charleston and back to benefit a planned Holocaust educator’s lending library in Savannah, as well as a project in Charleston. Sponsored by the Jewish Motorcyclists Alliance (JMA), the rides previously have benefited the Paper Clips project in Whitwell, Tennessee, Magen David Adom (Israel’s Red Cross) and the National Holocaust Endowment Fund.

The riders will be arriving in Savannah on Thursday, May 14th where the DeSoto Hilton Hotel downtown will be their main base of operations. They’re hosting a cook-out in Madison Square next to the hotel on Thursday at 6:00 pm.
[Yenta says: BE THERE.]

Commenting on the JMA’s decision to come to Savannah, JEA Executive Director Adam Solender stated: “This is such a unique combination of people joining their passions — motorcycling with Holocaust remembrance. Their mere presence gives us all a reminder that we each must do what we can to learn from the past so that the horrors of the Holocaust never happen again, anywhere!” Lynn Levine, Director of the Savannah Jewish Federation, added: “This ride is an example that as life goes on after the horrors and tragedies of the Holocaust, we can find ways to use enjoyable experiences to remember and learn from the past. We are grateful to the JMA for choosing Savannah and our planned library as one of the beneficiaries of this year’s ride.”

The main event takes place on Friday morning, May 15th, starting at the JEA where the riders will begin assembling between 8 and 8:30 am. [Yenta says: Scaring the neighbors is going to be great fun.] The JEA and Savannah Jewish Federation will host a breakfast and proper send-off for the JMA before they “head out on the highway” at 9:30 am for Charleston.

For more information about this fun-loving group: jewishbikersworldwide.com and www.ride2remember.com.