Remember that fab new job I started over the summer promoting Georgia history? Well, it’s history as of Friday.

Not quite sure what happened, as I had some what I consider several successes in attracting statewide media coverage to the organization in the five months I was there, but apparently there were other factors involved that remain opaque. All I can say is I know I did everything I could to squeeze this round tushy into a square hole and I wish all the lovely people over there the very best.

Bygones. The good news is that I’m a full-time yenta again, which means this website will be getting some kind of makeover in the coming months and that the book proposal will get some loving attention. 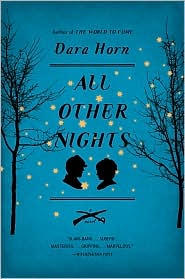 Speaking of books, I picked up Dara Horn’s latest, All Other Nights, last week at the library and I’m already hooked like a gap-mouthed trout. It’s a meticulously researched historical novel about Jewish spies who run both sides of lines during the Civil War, a period I remain fascinated by in spite of not being paid to like it anymore.

Based on real personalities like Judah Benjamin, the Confederacy’s Jewish Secretary of State and spymaster, and on historical facts and events ranging from an African-American spy network to the dramatic self-destruction of the city of Richmond, All Other Nights is a gripping and suspenseful story of men and women driven to the extreme limits of loyalty and betrayal. It is also a brilliant parable of the rift in America that lingers a century and a half later: between those who value family and tradition first, and those dedicated, at any cost, to social and racial justice for all.

So that’ll keep me busy for a little bit. It’s so interesting to see a broadened historical context for Jewish stories—especially the in early American history. Of course, Savannah’s storied Jewish past would make excellent fodder for a novel…I’ll get right on that, ‘k?

Continuing on the Civil War theme, I, along with the rest of the folks at last night’s Director’s Choice showing at the Savannah Film Festival, got a sneak peek of Robert Redford’s The Conspirator, filmed right here in the SAV. The film stars that sexy Scot James McEvoy as the lawyer charged with defending the mother of one of the men who planned Abraham Lincoln’s assassination—played with depth and grace by the gorgeous and amazing Robin Wright (I do believe she has dropped her ex-husband’s name.)

I’ve been a devoted fan of RW’s since I was a teenager—yes, before she was Forrest Gump‘s Jenny, even before she melted everyone’s heart as The Princess Bride: I have adored her since she was the beautifully tragic Kelly Capwell on the super-cheesy 80s soap opera Santa Barbara and I would fake being sick just so I could stay home and watch her get chased by her serial killer boyfriend and have miscarriages. Many years later, when she and then-husband Sean Penn lived down the road from us in Marin County, I once saw her at the drugstore and stared for about 30 seconds longer than would make anyone comfortable

So yes, that’s embarrassing, and when I got to actually meet and hang out with her last night at a dive bar on River Street, I am proud to say I kept those little tidbits to myself. By the way, she’s as gorgeous in person as she is onscreen—you should see The Conspirator just to check out her flawless complexion.

The night also paid tribute to Bobby Zarem, legendary publicist and Savannah son, whom I am hoping to interview here very soon, if he’ll have me. Bobby is the great mind behind the “I (Heart) NY” campaign and one stupendous character; he’s the magnet that’s attracted so many stars and films and finance to Savannah and I feel pretty damn cool wearing my “I (HEART) BZ” baseball hat today.

Finally, the best thing about losing my job is that I have time to take my mother-in-law to lunch at the JEA with the other Yentas today. She’s difficult to manage these days, her body deteriorating almost as quickly as her mind, but she still likes the chicken. And the company, I think. I know I do.

8 thoughts on “Back to the Freelance Grind”