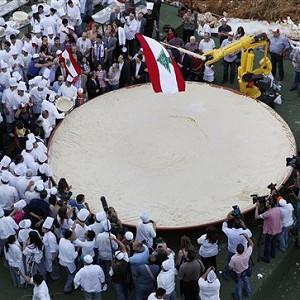 So Israel and Lebanon have had their scuffles, most recently in 2006 when Israel bombed the crap out of Beirut in order to stop Hezbollah terrorists from raining over loads and loads of Katyusha rockets.

But apparently, that’s not even the biggest reason for the rivalry: Forget bombs, it’s about FOOD. Both countries claim that hummus, the traditional Middle Eastern dip made from chick peas and tahini is their special cultural contribution to world cuisine, and the battle is ON.

Last Saturday, over 300 Lebanese chefs helped break the Guinness World Record for the biggest plate of hummus, taking the distinction away from the Israelis. The previous record of 4,090 kilograms — 8998 pounds — was surpassed by over 6000 kilos — that’s almost 23,000 POUNDS of hummus, people. You could fill every bomb crater on both sides and still have enough left over to spread on a piece of pita the size of New Jersey.

Now Lebanon is after the falafel record — which means enough fried balls to bury both countries.

This gastronomic rivalry between two countries still technically at war seems almost, well, civilized. If everyone is well-fed and working, what’s the point of war? Can either country honestly lay claim to dishes that go back so many thousands of years? Surely mothers on both sides of these modern borders slaved away over hot stoves to feed their families these dishes and were annoyed when no one cleared their plates.

I’d like to delve deeper into that big vat of hummus, but all I can think about is lunch — and what a wonderful world it would be if the IDF and Hezbollah would start lobbing falafel balls and hummus back and forth.

One thought on “A Battle To Nourish The Masses”