Those Maccabeats mensches, so clever and musical! And totally a cappella — not even a shofar to accompany them!

But I’ve heard they’re a revolving group whose members must be of a certain age. Once they get old, they’re out, like the halachic equivalent of Menudo.

HOWEVER, even though these four adorable punims graduated from yeshiva last year, they still made us a Chanukah song — or rather a mash-up of a few:

Cute, nu? But surely these nice boys didn’t listen to Ke$ha over and over again?! That girl couldn’t get kosher if she steeped in the mikveh and moved in with Mayim.

So I wrote this fantastic little story for y’all last Friday about El Yenta Man’s and my adventures in scary shopping.

It was one of those perfect holiday posts, just the right balance of jokesy folksy fun, sentimental musings on gratitude and a small anecdote about how I almost decked someone in the head with my purse.

I also updated you on my dear mother-in-law,  who we enjoyed having at the Thanksgiving table and likely won’t be there next year. I also revealed my secrets on how I make an entire bottle of bourbon disappear with very little assistance. It was a colorful, nuanced piece of writing. You might have enjoyed it, or at least, possibly finished it.

Except that just as I went to post it, my WordPress platform ate it.

Yes, I tried hitting the back button, thanks. It was, I promise, suddenly and finally GONE.

I did, I cried. A little. But I am proud to say that I did not trash my desk like I was Charlie Sheen at the Plaza over this state of affairs, nor did I disappear another bottle of bourbon. But nightfall approached, and though I am the world’s most creative Jew when it comes to the the rules of the Torah, I do NOT write on Shabbos. Rest is rest. So I basically flushed those four hours of work, gathered my family around the table and ate some gawdamuthafarkin leftovers.

On Sunday, when I was racing the deadline for the day job, I stole out to my favorite coffeeshop owned by a WordPress giant. My main WP lady Jane Wells (and also kickass gluten-free baker) sez there must’ve been a glitch in the Internet that prevented the automatic draft-saving feature. Jane said Post Loss has happened to her plenty, and copying and saving writing somewhere on one’s desktop is never a bad idea. She gave her condolences on the death of my post and also advised against trying to rewrite it, as it never comes out as good.

I try to listen to experts. So instead of trying to gather up the lost words like so many grains of sand, I give you something far better: The first Chanukah parody of the year:

Thanks to Jewlicious for spreading the word about the Borenstein Boys from Fairfax, VA. Like these B-Boyz? They have more…. 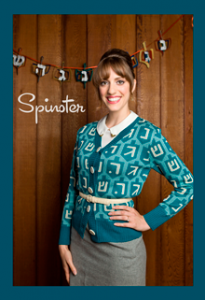 I looked at the calendar this morning and saw that Chanukah is in less than four weeks WHA’?! I’ve barely finished picking wax out of the carpet from last year!

Actually, I loooove it when the Festival of Lights falls early (as in, before Christmas) because we get our holiday season all to ourselves — and then we get to schnorr everyone else’s. (Who’s a sucker for candy canes? This girl.)

Dude is based in L.A., which is a bummer ’cause he’d be an a-MAZE-ing DJ for Yenta Boy’s bar mitzvah. Riddle me this, peeps: WHY ARE MEN WITH PUPPETS SO SEXY? El Yenta Man’s getting a marionette this year, for sure.

Even though I will probably still be running around town for menorah candles on Dec. 8, I had the wherewithal to order this super spectacular dreidel cardigan from Modern Tribe as my gift to myself. (Spoiler for the goyim: The eight presents thing only applies to kids.)

I plan to wear it EVERY SINGLE DAY of Chanukah as payback for the hideous red and green snowman attire I will be accosted by the minute Thanksgiving is over.

How cute is folk moppet Michelle Citron when she’s political?! Check her plea to the Jewish grandparents of our great country:

Of course, our Bubbe and Zayde (aka Boma and Bopa) voted early, ’cause they’re like that.

*Hugs to Amy Zohlman Bergman for the tip!