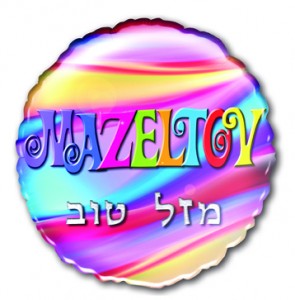 ‘Tis a season of most joy in Yentaland these days as we recover from yesterday’s Shalom Y’all Jewish Food Festival and prepare for my Brother the Doctor’s wedding this week, along with the continued and possibly never-ending planning of Yenta Boy’s impending ritual of manhood.

Yes, simchas are all about GOOD TIMES. But as most grown-ups know, fun TAKES WORK, which no one ever tells you when you’re a free and easy single. Or maybe someone did, but you weren’t listening because you were too busy smoking weed in the back alley and snarfing all the free canapes. So let me tell you: Every party or event you ever enjoy was made possible by a committee of tired and delirious people who excreted blood, sweat and tears into it. Literally. Especially when it comes to the latkes you ate at the Jewish Food Festival, so let’s pass out the Tums all around.

As for the Food Fest, I did my part in advance by pumping up the event at the day job (read about the epic baking efforts of Savannah’s Challah Back Girls here) but it was El Yenta Man who dragged his tushie out of bed at dawn Sunday morning to load all the trucks. And what a turnout! Thousands of strudel-lovin’, egg cream-downing, lox-licking goyim packed Forsyth Park, reinforcing the well-known axiom that Jews don’t need to proselytize when we’ve got blintzes.

Then there’s Bro da Doc’s wedding taking place this weekend, and though he and his betrothed planned the entire shebang themselves, there’s is the issue of packing fancy clothes for the entire family as well as selecting a wedding gift for people far more fashionable than you. Thank the Lord for Modern Tribe.com, where I found a classy seder plate and Jonathan Adler bird bowls for next Passover, when we will descend upon their clean and childless home and probably break them. (Yes, they already opened them so I’m not spoiling the surprise, AS IF they have time to read this blog a week before their entire families arrive for their wedding.)

I think they’re pretty nice, considering my brother makes it a practice to buy the most obnoxious Chanukah gifts he can find for his niece and nephew and I could’ve paid him and his bride back by sending them this.

Then there’s the monkey on my back, the albatross around my neck, the gremlin that wakes me up at 4am to whisper “You haven’t found a caterer yet. Did you invite ALL the second cousins? Band or DJ? What about a tallis? Should you pay extra for the fancy chairs?”

I’m telling you, the bar mitzvah planning IS GETTING TO ME. It’s a lot of details I’ve never considered before and I’m very grateful event planner Mindy Nash has stepped in to save me from becoming a Jehovah’s Witness just to avoid this mishegoss. I think I’ve finally addressed all the invitations, even though deciding to forego the lined envelopes sent me into an tailspin.

There’s a lot of work still to be done, but I’mma gonna do my best to keep my bodily excretions out of it.

The interwebs have ‘sploded with this “open letter” to pottymouth princess Sarah Silverman by haredi rabbi Yaakov Rosenblatt in which he accuses her of not being Jewish enough to quote the Torah and calls getting married “the most basic desire of the feminine soul.”

He is a douche.

I might like to think of myself as edgy (Sister Sarah has boo-ya all tied up, hence her HEEB magazine cover posing with the proverbial hole-in-the-sheet) but I don’t enjoy calling rabbis nasty names. Respect for the position dies hard. HOWEVER, when a dude with six kids who slaughters cows for a living gets all judgey about how a woman chooses to live her life, the gloves are OFF. Seriously, he wrote this:

Nothing you say or stand for, Sarah, from your sickening sexual proposal to a Republican donor to your equally vulgar tweet to Mitt Romney, has the slightest thing to do with the most basic of tenets which Judaism has taught the world – that the monogamous relationship is the most meaningful one and that a happy marriage is the key to wholesomeness.

Really. That’s what Judaism has taught the world? Well, sheee-it. I’d better rework my Shalom School lesson for next week ’cause I was gonna focus on something totally stupid, like ethics.

The Jewish Press, the website that published this letter, sure must be enjoying their 15 minutes of Internet flushing fame for posting this narrow-minded, misogynistic, backasswards nonsense. Their response to the hullaballoo is defensive and equally divisive, again accusing those who are not rigidly observant as “not Jewish enough.”

Just not buying it. Yes, it’s highlighted the gap between the extreme Orthodox and “cultural” Jews, but I’m not sure it’s a different gap than the one that exists between all fundamentalists and the rest of us.

Interestingly enough, the Jewish Journal had the opportunity to publish this first yet chose to pass because, as editor Rob Eshman points out, while it was sure to incite lots of hits, it was just plain sucky writing:

You can’t write about things you have no knowledge of—in this case a young woman’s personal life and beliefs. And you can’t  spread damaging conjecture and perhaps lies about someone.  And just because you disagree with someone’s politics doesn’t mean you know their character, or have the right to demean it.

None of that is good journalism.  And I’m no rabbi, but it doesn’t strike me as Judaism, either.

Oh, and if you haven’t read the epic response posted by Sarah’s dad about who’s who on the list of influential Jews, it’s quite a read. 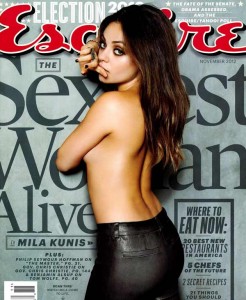 Well, isn’t this faaaancy: Yiddishe cutie Mila Kunis has been deemed the Sexiest Woman Alive by the heavy-breathing chronic salivators at Esquire Magazine.

This is, as Sisterhood blogger Emily Shire points out, GOOD FOR THE JEWS.

“Centuries of telling us we’re weak, unattractive, and the like have made us burst with pride when our counterexamples hit the national stage.”

True dat. To all the boys who ever made fun of bucked teeth and frizzy hair and big schnozzes, Jewish girls’ lookin’ pretty hot right now, am I right? Can I get a Mmm-hmmm and Hells yeah!?

Not that Miz Mila and her nekkid torso are going to be paraded through Shalom School as an example, even if the poor little tateleh grew up in the mean anti-Semitic streets of Ukraine. But she’s a totally sexy and talented little shaineh maideleh, and we’ll take her.

But I’ll tell you what: I wish we could claim Balpreet Kaur.

A couple of weeks ago, someone named “european douchebag” posted a photo on Reddit of Kaur, a student at Ohio State, as snarky fodder presumably because of her turban and beard. With a grace usually only observed in swans and the movement of the planets, the Sikh woman and future neurosurgeon wrote a response that gently but definitively schooled the shmuck:

“Yes, I’m a baptized Sikh woman with facial hair. Yes, I realize that my gender is often confused and I look different than most women. However, baptized Sikhs believe in the sacredness of this body – it is a gift that has been given to us by the Divine Being [which is genderless, actually] and, must keep it intact as a submission to the divine will. Just as a child doesn’t reject the gift of his/her parents, Sikhs do not reject the body that has been given to us. By crying ‘mine, mine’ and changing this body-tool, we are essentially living in ego and creating a seperateness between ourselves and the divinity within us.

By transcending societal views of beauty, I believe that I can focus more on my actions. My attitude and thoughts and actions have more value in them than my body because I recognize that this body is just going to become ash in the end, so why fuss about it? When I die, no one is going to remember what I looked like, heck, my kids will forget my voice, and slowly, all physical memory will fade away. However, my impact and legacy will remain: and, by not focusing on the physical beauty, I have time to cultivate those inner virtues and hopefully, focus my life on creating change and progress for this world in any way I can.”

So clear. So kind. Such dignity. With love. A humbling lesson for all of us. Especially European douchebag, who was touched enough by Balpreet’s simple loveliness to post a fairly articulate and sincere apology.

It’s things like this that make my heart sing. Boys might still put naked girls on the covers of magazines, but the world might just be evolving.

Well, I don’t normally crossover writing from the day job over here, seeing as Yo, Yenta! is ALL JEWISH, ALL THE TIME. 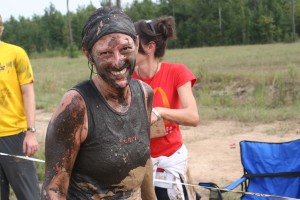 But I thought the few folks who haven’t seen this hideous view of me yet (Look, Ma! Mud on the orthodontia!) might like this filthy tale. Plus, it revolves around some really sick Holocaust humor.

Every birthday, I renew my contract with life with an action that makes me a shade uncomfortable, like cutting off my hair or say, skinny–dipping in a public fountain.

Any therapist will tell you stepping outside your comfort zone once in a while is a fine idea, right?

Stretching your boundaries builds confidence! they say. Life is nothing without a little risk!

However, when that small step lands you neck–deep in a pit surrounded by Scripture with mud shoved up in places no doctor has ever examined, you may have gone too far.

Read the rest at ConnectSavannah.com.

Also, in case you were wondering, I did break down and get some antibiotics this morning. I had a terrible headache and convinced myself I had contracted encephalitis from the dung river.

I’ve also had to promise El Yenta Man that I will never, ever do this again.

When I first saw The Frisco Kid in the theater in 1979, I had never seen an Orthodox Jew before. I was 8, we were Reform. My rabbi wore Nikes and Izod shirts.

But I cried when I saw Gene Wilder — playing a Polish rabbi dispatched to San Francisco during the Gold Rush of 1849 and wandering down the road in his long johns after some bandits threw all of possessions out of a covered wagon — fall to his knees when he came upon his lost Torah lying in the dirt road.

What can I say, I was a sensitive child. The tears soon turned to laughter when he encountered a group of Amish farmers and started yakking in Yiddish (here in this clip at 1:55):

Somehow, this cute buddy film (a young and handsome Harrison Ford plays Reb Avram’s gonif sidekick) awoke the idea that being Jewish was important and valuable. I didn’t even know what tefillin was called, but I actually remember making a little box and tying it to my head the next day. Weirdest kid in the neighborhood, really.

Anyway, the Yentas watched this jewel last week, and my kids know a lot more about Judaism than I did at their age. We noticed that the mezuzzah was pointed the wrong way on the front door. And when the rabbi’s chosen wife appeared in a very lowcut dress, Yenta Boy snorted and said, “No Jewish father would let his daughter wear THAT.”

A good one for Family Movie Night, for sure.