…even if it is performed by puppets. How is possible no one ever thought of pairing “Dayenu” with Freddie Mercury before? 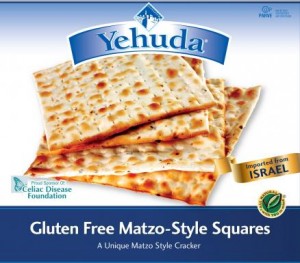 This likely has many of you in the throes of gastric distress, not just for the epic cleaning to be done but for the anticipation of eight straight days of eating matzah. It’s not called the “the bread of affliction” for nothing, people.

I cannot, and will not, help you sweep stale pieces of Kashi out of the corners of your kitchen. But I can help prevent the uncomfortable binding sensation: Gluten-free matzah.

Yes, going gluten-free is super trendy these days, and those of us with gluten sensitivities deeply appreciate Yehuda’s addition to the wheatless pantry. Instead of wheat flour, this flat food is made of tapioca starch, potato starch, potato flour, pressed palm oil, natural vinegar, egg yolks, honey, and salt.

But can it really be Passover without the usual bland Streit’s squares?

Hmm, let’s see: Looks like matzah, with those weird little hyphen-shaped holes. It’s got the Orthodox Union hechsher on it with “Kosher for Passover.” (However, the OU does not recommend it for use at the seder for “sacramental purposes.”)

The Yenta family conducted a taste test of a box of Yehuda Gluten Free Mazto-style Squares last week with much skepticism. The three other members have in the past pronounced their displeasure with certain gluten-free meal experiments such as corn pasta and spelt challah. However, with a five-dollar bribe (which I will be writing off next year as “research”,) they were convinced to crack the crackers.

Yenta Boy reported that Yehudas were saltier than regular matzah but had a nice, light texture. Most importantly, he wanted to know “If we use it for the afikomen and I find it, do I get another five bucks?”

Little Yenta Girl was an easy sell. In fact, she chewed thoughtfully through three pieces before announcing that she needed just one more to make sure she really, really liked them.

Then came El Yenta Man, who lumps “gluten-free” into the “silly New Age sh*t” category in his brain. “These are actually really good,” he gasped, wide-eyed. Then his eyes narrowed. “But that doesn’t mean you can serve those gross hamburger buns again.”

Me, I think they taste exactly like Pringles. Without the MSG and other nasties, natch. 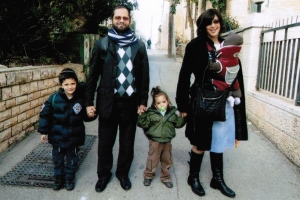 Still reeling from yesterday’s shocking attack on a young rabbi and his two sons in front of a Jewish school in Toulouse, France.

Reports say that the gunman shot into the cluster of children and adults in front of Ozer Hatorah school from a motorbike and may have been wearing a video camera around his neck. Forensics have already linked the shooter to last week’s murders of four dark-skinned French soldiers, and there’s question on whether these are serial killings or hate crimes. Obviously, both. Today authorities are tracking down French paratroopers with Neo-Nazi connections.

I am filled with sadness for the mother left on this earth without her husband and sons. May her community and faith couch her bereft heart, and may the police catch the motherf*cker who did this.

Yesterday also brought more death in Jewish news: Convicted Nazi concentration camp guard John Demjanjuk took his last breath in a German nursing home over the weekend. I’m sure there’s someone who’s mourning for him, but I won’t shed a tear over one less Nazi in the world.

I wrote this about him last May.

Also, my heart is with the mother of Trayvon Martin, the 17 year-old boy shot and killed by overzealous vigilante George Zimmerman Feb. 26. Zimmerman has not been arrested, as Florida’s laws allow a person to shoot someone in “self-defense,” even if the other person in unarmed. Martin was carrying only a bag of Skittles, a detail that brings tears to my eyes every time I read it. 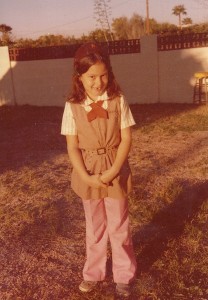 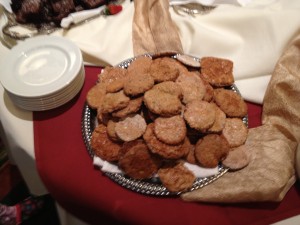 Oh, it’s my favorite holiday, the Feast of Esther, the time when it’s marginally OK to pass a flask at synagogue.

Of course, I did not that share information with the Shalom Schoolers last Sunday, but I did invent a new Purim game totally on the fly: 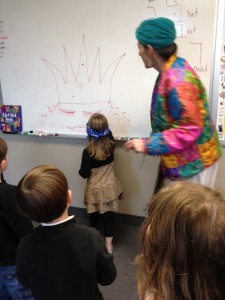 Better than Pin the Tail on the Donkey because it doesn’t involve a mule’s tuchus, “Put the Jewel in Esther’s Crown” only needs a blindfold, a marker and some sparkly stickers. Closest one to the center of the Star gets a prize. Actually, because I’m that kind of teacher, all the kids got prizes. But only after they answered a Judaica trivia question first. You can totally steal the idea for next year.

You can’t get a full view because I had to choose a photo that didn’t show any punim (it is not kosher to post pics of people’s kids without asking,) but I felt my costume was rather inspired. Do you not love the turban? It the one my mother-in-law wore when she was recovering from breast cancer, before the dementia. (Yes, she is still with us, in body and spirit if not mind, thanks for asking.)

The wild satin jacket is courtesy of my Bubba Reggie, of blessed memory. The handmade bloomers have traveled with me ever since I left Tucscon in my VW bus almost 20 years ago.

Of course, for last night’s mini-Megillah fest I went as my usual Haman. The ever-good sported El Yenta Man did his Queen Vashti drag routine, in spite of not having the proper-sized balloon bosom. Why do not more adults dress up for this holiday? It’s FUN. 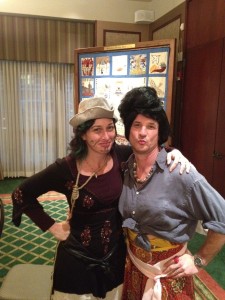 Yes, that is a noose and a Snooki wig and that is how we roll.

Speaking of Puriming it up like a pimp, I brought along a bit of my homemade honey pear liqueur to nip on before the service. I noticed a hip-looking, white-haired lady at our table that I’d never met before, so I offered her a shot. Call it Southern Jewish hospitality, yo.

Turns out she’s a writer from New York doing a story about Savannah (and our 100th anniversary of the Girl Scouts celebrations—check my Jewishy G.S. piece in this week’s Connect) for a travel syndicate.

Knocking back my homemade hooch, she introduced herself as Amy F. J. Stone. We started playing Jewish geography, and she humbly revealed that she is the founding editor of a little Jewish feminist magazine called Lilith.

This may mean very little to most of you, but to us Jewish feminists, it’s a rather big deal. In continuous publication since 1976, Lilith magazine “charts Jewish women’s lives with exuberance, rigor, affection, subversion and style” with brain-challenging social criticism, thoughtful reviews and awesome articles about how hamantaschen are just upside-down vaginas. Though I’ve only perused a couple of copies a year (it’s a quarterly) online or at friends’ houses, I just bought a subscription.

Ms. Stone herself has her own entry in the Jewish Woman’s Archive, which makes her a real macher in my book. I had the honor of showing her around town this afternoon and we had great fun (even though I left the flask at home.) Be on the lookout for fabulous travel article about Savannah in your Sunday paper in the next few months…

So Purim Sameach and all that. Next year, if I promise to bring enough pear liqueur for everybody, will you all promise to come in costume?

Could there be better way to ring in Passover next month than rocking a shirt with the stuttering star of the story?

Two tablet, ten commandments, four colors. This is what I call hipster sederwear, yo.

The term “Hebro” was recently coined by Stuntrocker Dave Rosen, and I cannot stop singing “We could be Hebros” to the David Bowie tune. And now, neither can you, right?

Available here, with plenty of time to plan a coordinating outfit around it before April 6.

What’s that, Christian friends? You want one for Pentecost? Fabulous for you, Hebro comes in a New Testament version, too.