In my early 20’s, I dated a very sweet, green-eyed shaygetz boy who was canvassing restaurants one fall looking for work. One afternoon he called me frusturated because the head chef of Mill Valley’s fanciest kitchen cancelled their interview because he was “too busy preparing the dinner menu for some chick named Shashanna.”

Obviously, our relationship was not meant to be. He was a great cook and lovely person; it wasn’t his fault he grew up with Christian fundamentalists in south Tucson. But what do you suppose is the excuse of the Los Angeles-based Dreamworks (owned by that Jewish guy, think his name’s Shpielberg or sumpin’) admin assistant who wrote this asinine memo?:

Off to insinuate myself into the Book of Life for another year.

So. Either you’re getting ready for synagogue and making thorough list of atone-able sins, or you’re gonna sit down with a sandwich in front of VH-1 tonight to pay homage to one of rock’s most amazing Jewish musicians, Geddy Lee, and his band Rush.

But just remember: Even if you choose not to decide, you still have made a choice.

Free Will and L’Shanah Tovah Umetukah to all!

Sarah Silverman lends her potty mouth to The Great Shlep to get Jewish grandparents on board with Obama. Like you need a warning, but it’s, um, not for kids.

Yes, a new year is almost upon us, and Savannah weather has finally turned from blanketing us all with hot, dank air that you could literally cut through and spread on a piece of toast (if wasn’t too freakin’ hot to plug in the damn toaster) to gorgeous, breathable fall breezes just crisp enough to sprinkle some cinnamon on and dip into a vat of honey.

5768 is almost over, my sandals have been pushed back to the netherregions of the closet and I am making a booty call for these made-in-Israel Naot boots. They are so gorgeous they leave me speechless with podiatric lust.

No, I cannot afford them. Three hundred dollars for a pair of boots when there are so many other bills to pay is a SHANDA. But I have bargain-hunting skills, yo, passed down to me through four generations of fashion-obsessed misers who never let market price deter them. I will never forget the wisdom passed down from my Bubbe Reggie (may she be resting in peace as well as fabulousness) while shopping with her at Burdine’s department store in Miami: “Honey, we’re Jews. We don’t pay retail.”

What amazing treasures could my foremothers have tracked down had they had access to the wonders of eBay? ‘Cause that’s where I have just found the objects of my desire FOR HALF PRICE. I can hear Bubbe croaking her approval.

Now the shanda is that I can’t wear them to Yom Kippur services ’cause they’re leather.

Hey y’all – it’s deadline down-to-the-wire week in skirt!land and the Yenta may be a little slow catching up on her blogchores.

Lovin’ on this piece by ceramic artist Patricia Lazar, which I came across on the JudaicaJournal blog (who also posted some of the kickass photos of Alaska Women Reject Palin Rally.) I don’t know if it’s a plant holder or a place to keep the Shabbat matches hidden from pyro-obsessed children or what, but IT PRETTY. 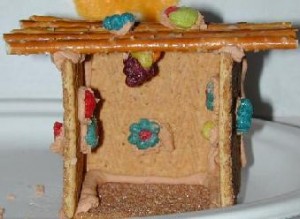 I swore to the children last year that we would build a real sukkah this year for the Festival of Eating In Little Booths In the Backyard instead of our usual mini-versions made of graham cracker walls, a pretzel roof and fruit-shaped cereal (although my Shalom School kids always enjoy that project!). I was super inspired by this month’s hip sukkah spread in Jewish Living Magazine and I have Martha Stewart fantasies of lounging with our neighbors in a fabulous tent with purple curtains, feeding each other pomegranate seeds.

But there’s a teeny problem: Building a sukkah requires tools. Now, El Yenta Man wields a fishing rod like a Viking, and should the banks continue collapsing like the four horses of the Apocalypse are galloping into town snorting fire, he could probably feed all of us from the sea with nothing but a spool of thread and the pop top from an old beer can. But the thought of spending several continuous evenings in a structure that he nailed together – even if he did manage keep all his limbs while constructing it – makes me nervous.

Everyone keeps telling me to buy one of those pre-fab modular jobbies, but OY GEVALT they’re expensive – and the price doesn’t even include so much as a fringey strip to decorate the bare walls. But then I found this basic 8×8 kit for a decent price, “designed for the complete novice builder and requires no previous carpentry skill or knowledge.” That’d be us. Supposedly the only tool required is a power screwdriver, and it comes with a “Klutz-Proof” Manual, which sounds very promising.

Any of you done this before? Can ya help a sister out with some advice?

Tzipi Livni won the Kadima primary yesterday, and if she can rally enough support from Israel’s rambling list of political parties to create a governing body (seriously, American may have invented democracy, but the Knesset makes our two-choice system look like a sham,) will likely become the Holy Land’s second female prime minister (Golda Meir blasted the Israeli glass ceiling 30 years ago.)

Plus, I’m pretty sure she could wipe the UN floor with Ahmadinejad’s beard if given the opportunity.

Longtime readers of this blog know of the ongoing bubbeminza concerning Yenta Boy’s passion for slithery reptiles and his confusion about how little Jewish boys come to own them. Newcomers, feel free to catch yourselves up with Part One and Part 2 of this saga.

He hasn’t mentioned Santa in a while, which has been a huge relief, but the kid has not let go of the snake idea. At the beginning of last year I told him he could have a snake – IF he kept the fish we bought him for Chanukah alive, and IF he did all his chores AND homework and IF he paid for the animal and all its weird snakey accoutrements himself.

Well, he met all those requirements, and yesterday, plagued with a vicious hangover combined with the clanging feeling in the brain that comes from trying to teach eight 5 year-olds the story of Creation (Now, children, how many days did it take God to create the world? Anyone? Anyone?) I was finally worn down by the cajoling, begging and emotional blackmail. So please join the Yenta family in welcoming our new addition to the family, a 20-inch ball python named Nag.

I know what you’re thinking and my child did NOT name his pet after his mother, thank you very much, but rather for the malicious cobra in the cartoon version of Rudyard Kipling’s Rikki Tikki Tavi. I’m kinda proud of him. But if the kid starts up with how Santa’s gonna bring him one of those little motorized Jeeps because his mother is so mean and says no, it’s gonna be snake steaks for dinner.

I never thought I’d want to pin Jesus’ name over my little Jewish heart, but crazy times call for crazy measures.
Get yer own.

And if you’re looking for a link to Tina Fey’s completely classic impersonation of the former “small town mayor of Alaska’s crystal meth capital” on Saturday Night Live, click here.

Anyone else read Sunday’s NY Times article about Palin’s penchant for hiring unqualified friends for important positions? Gosh, I can’t wait for the checkout girl at the Wasilla 7-11 to head up FEMA!