Leonard Nimoy – an enterprising spirit if there ever was one – has embarked on a new direction in his photography that’s endeared him forever to this fat-bottomed girl.

The Full Body Project is a collection of black-and-white portraits of proud, happy, large women based on famous paintings that’s meant to challenge our notions of beauty. The exhibit debuted last year at R. Michaelson Galleries and is available in book form.

In the book’s intro, 77 year-old Nimoy rallies against the malevolence of Madison Avenue:

The average American woman weighs 25 percent more than the models wearing the clothes marketed to her. There is a huge industry built up around selling women ways to get their bodies closer to a fantasy ideal. The women in these pages are proudly wearing their own skins. They accept and respect themselves and I hope that my images convey that feeling to others.

For some big laughs, check out Leonard’s interview with Stephen Colbert – hilarious.

Personally, I’m not shocked that the man formerly known as Spock is pushing the boundaries of the feminine. He’s always represented the female form in his art in a provocative way, and really freaked out a lot of religious Jews a few years back with the Shekhina Project, an exploration of sacred sexuality that had scantily-clad women posing with male-only religious objects like tallit and tefillin. By taking his lens to big tushies and saggy boobies, he’s shaking up everyone, bless that pointy-eared Vulcan.

I went to my first Catholic wedding last weekend. El Yenta Man has a doll of a client who finally tied the knot with her beau of eight years, and we were honored to receive an invitation. I love weddings no matter what the denomination – the joining of two souls under the Creator and all that. Plus, you know me – I am all about free food.

But first, we had to go to church. This used to make me nervous until I realized that setting foot inside a Christian house of worship would not actually erase my Jewishness and make all my ancestors roll over in their Polish graves, an idea I picked up from my bubbe, who also told me crying would give me wrinkles.

Now I enjoy visiting churches when given the chance, especially in foreign countries where there’s lots of pretty statues to look at and little old ladies light rows and rows of candles (although the Jewish mother in me considers this extremely dangerous. What, can’t God hear without setting the drapes on fire?) But I haven’t sat through an actual service since my best friend and I drank a bottle of Boone’s Farm on Christmas Eve our senior year and snickered through midnight mass (I know, horrible. Please know that my disrespect for religion at that point in my life extended to ALL of them, including my own.)

Of course, El Yenta Man was operating on JST (Jewish Standard Time) so we arrived 15 minutes late and bickering. Forget blending in – we might as well have been waving a giant flag with “Two Loud Late Jews.” We ducked into a pew and I checked it all out – high knotty pine ceilings, giant candlesticks, well-dressed people – it all looked familiar enough.

Until I swung my head forward and saw the 15-foot Jesus. I wasn’t really shocked to him hanging there; I mean, what did I expect, a giant golden calf? But wow, he was big. I couldn’t really take my eyes off him. We Jews aren’t used to having much to look at during services – usually I’m trying to keep my aleph-bet skills fresh by sounding out the Hebrew with my hand covering the alliterations (yes, I still have to peek) and when that gets boring, I study the stained glass windows. Sometimes I eavesdrop, because someone is always carrying on some kind of conversation in synagogue.

But in this church, no one was whispering. I can see why; how can you discuss Mrs. So-and-So’s whacked hat with the feathers or what’s for kiddush lunch when there’s a giant Jesus eyeballing you? At least he wasn’t bloody. My deepest apologies to my Christian readers, but that kind of gives me the willies.

So all was quiet as the bride and groom knelt at the altar. Except for El Yenta Man, who anyone will confirm is an abnormally chatty guy but on this day was affected by a verbal diarrhea so acute he couldn’t help running a commentary on how much he liked the pretty green color of the bridesmaid’s dresses and how gorgeous the bride looked and ooh, there’s Mister Whatsit and he’s just the nicest person…

I tried to explain to him that were weren’t at Mickve Israel and that if he looked around he would realize that no one else was talking, but the woman in front of us turned around and gave us the Stinkeye. So I resorted to the “church pinch,” which seemed appropriate.

“Ow! Why’d you do that? Anyway, did you see that dad from school? I saw him the other day at …”

Finally, I poked him and mouthed “Would you shut up? Jesus is watching!”

El Yenta Man cocked his head and studied the ginormous crucifix for awhile. There was a call and answer portion of the service not unlike a Reform Shabbat, except when everyone knelt down on the small boards attached to the backs of the pews that I guiltily realized were not footrests.

Really, you can’t take us anywhere.

Mazel tov to the happy couple.

Same thing I been sayin’ for years, only this says it with way better deadpan.

You are registered to vote, right?

There’s an interesting show up at the JEA right now that y’all must check out.

Ching Levy is a local Savannah artist who began her career on on rice paper using traditional Chinese brush strokes and has evolved into a unique, delicate style that incorporates Eastern and Western influences. She’s won awards all over the place and I just love her colorful, kind aesthetic:

A colorful flock gathers at the treetop
Singing in unison celebrating freedom
Hand in hand, living in one space
With united hearts and combined strengths for the earth

What I’m wondering is how such a talented Chinese Jewess has escaped the Yenta this long.

Or has El Yenta Boy’s latest obession of all things Asian tricked me into a hopeful game of Jewish geography?

I’m thinking about all the smaller chozzerai I could stuff into this adorable pita purse:

My iPod and some lunch money, an extra pair of socks and a small notebook, a Tupperware container of babaganoush made from the dozens of eggplants El Yenta Man’s got growing in the “backyarden” (that’s Little Yenta-ese for the fertile plot of land behind our house.)

Come to think of it, if I threw in some of the other happy veggies, I’d have a pita pocket full of purple peppers.

Three years ago (to the day!) I reported that Israeli researchers had germinated a 2000 year-old seed excavated at Masada, the stronghold of Jewish fortitude. The botanists called the lil’ sprout “Methuseleh” for that super old dude in the Torah, and nurtured it with fertlizer and love.

The green thumbing paid off, ’cause now that seed – the oldest to have ever sprung a shoot in captivity – is now a healthy date sapling standing about 1 1/2 meters high (that’s almost five feet – taller than my oldest kid!) This raises the possibility of resurrecting a long-extinct species famous for its large, sweet fruit and perhaps using dates for medical properties – ancient texts say they were used “to treat tuberculosis, heart problems, worms and infections.”

I’m a tree-hugger anyway, but the fact that this seed came from the site that symbolizes Jewish strength and integrity makes it all the more worthy of reverence. Tree of life, indeed.

*Hat tip to Pepe Pringos for the update!

Number One: After last month’s raid on illlegal workers at the U.S.’s largest kosher slaughterhouse, kosher meat’s been in short supply lately. Think the price of gas is high? Try a $25 chicken.

Number Two: Even though Stephen Colbert recently encouraged the Jews to grab some six-foot forks and tuck into a nice plate of kosher giraffe, could you eat this punim?

Number Three: ‘Cause Tempeh Stroganoff rocks! Plus, you can have ice cream for dessert.

A restful, low-cholesterol Shabbat to all! 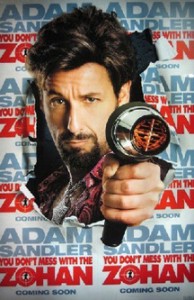 A fellow blogger asked me the other day why I was ignoring Adam Sandler’s new movie. C’mon, an Israeli superhero-turned-hairstylist who can pull off both meanings of the term “razor cut?”

But, eh, the reviews, not so good. Even our people don’t love it.

A little something for all the sinners from Thorn Busch.

Although already versed in New Testament scripture from my Mormon neighbors, I didn’t hear about the Rapture (that special moment when Jesus comes back with lollipops to take away all the believers in a big balloon) until my parents sent me to a non-denominational summer camp in Pinetop, Arizona.

One night after the fire circle, we 8 year-olds we sitting around our bunk telling scary stories. Ashley Winter, not to be outdone by my one-armed hatchet man-hiding-in-the-bathroom tale, informed all of us that while the gays, Jews and Satan-worshippers were going straight to hell, she and the rest of the good Christians were going to fly up to Heaven. There will be no warning, intoned blond Ashley of the ski-sloped nose. Everyone will just be *poof*! gone.

The next morning I woke at dawn. It was eerily silent, no breathing or snoring sounds (in spite of the Gidget-y perfectness Ashley’s nose, it was not so efficient in the exhalation department.) I looked over at the next bed, which appeared to be only a pile of covers. I sat up and surveyed the room in the shadowy light. All the beds were empty! Jesus had come in the middle of the night and taken everyone but the little Jewish girl with the potty mouth! Looking back, I should have been pretty happy because it meant I could get to the showers first and have at least five minutes of hot water, but instead I started screaming.

Suddenly, the sleeping bags came alive, which I mistook for the heathen-eating demons Ashley described in great detail. My counselors placated me with hot chocolate and told Ashley to keep her beliefs to herself, but I was psychically scarred, people.

My folks decided to send me to Jewish camp after that.

WTF? Potty-mouthed Sarah Silverman’s sister is…a rabbi? Meshuggeh to the max, yo. You gotta read Reb Silverman’s take on her wack sibling in this week’s j.