Mindy Schiller’s What’s Wrong With Hebrew School? in the current World Jewish Digest is a MUST read for every Jew who spent their Sundays reciting the aleph-bet and is subjecting their children to the same. It’s probably going to echo your remembered frustrations and those of your children – namely that it’s boring – but Schiller isolates a few variables like poor timing (like any fourth grader’s going to be bright and sparky at 6pm on a Wednesday) and part-time teachers who aren’t focused (um, you talkin’ to me?) that contribute to the problem.

The article delves deep into the real question – what’s the point of Hebrew School at all if no one’s really learning to speak Hebrew? My humble opinion as a lazy Jew and fast-and-loose Sunday School teacher is that whatever we can do to imbue our children with a positive Jewish identity that’s going to last through the college years is valuable, even if it’s only the memory of sitting on a rug doing the S’hma in sign language.

But those who teach the higher grades have real challenges trying to teach a language, prayers, culture and history in the two-and-half measly hours that their students would rather be playing Wii. Our Shalom School has incorporated the Union for Reform Judaism’s Chai program this year, which focuses on Torah and ethics, and the older students get a midweek dose of Hebrew as well. But is it enough?

You know I can’t possibly answer that. All I know is I’d better my tushy moving on this week’s lesson plan.

Remember when we got all weepy about the imminent axing of Anne Frank’s beloved chestnut tree? Well, because of the outcry that followed the Amsterdam city council’s mandate, the council has turned around and given the treehuggers until January to come up with a plan to save it, even though it’s in pretty bad shape.

Experts say the 27-ton tree is too diseased from fungi to be saved and the owner wants it cut down as he would be liable for any damage caused should it fall…A Utrecht-based firm, Trees Institute, has suggested a salvage plan involving treatment and support for the trunk and limbs.

Falling limbs aside…Ha! I knew complaining really loudly to get something done works!

With very few exceptions, rubber shoes are footwear non gratae in Yentaland. So very tacky, tacky, tacky. My mother might not have had her bat mitzvah until she was in her 50’s, but the woman taught me how to dress for synagogue. And there are classy, stylish ways to deal with the no-leather-on-Yom Kippur thing, people. There is no reason to resort to Martha Stewart’s gardening shoes, and certainly not with a Chanel suit. I don’t care how comfortable they are, you are seriously hampering your chances of being written into the Book of Life by sporting them.

I am referring to JTA’s announcement that the hated, hideous Crocs are the new Jew shoe. God help us all. 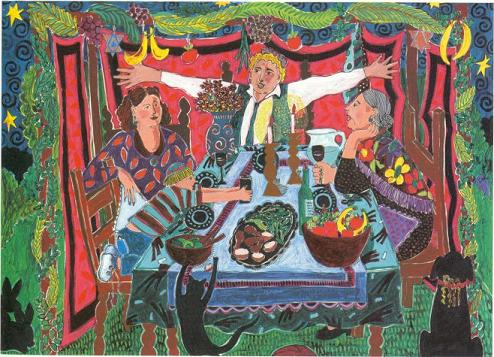 Good lord, October already? Wow. Lots of things I should be addressing, such as a belated but racous “Chag Sameach!” to all those hanging out in their huts nibbling on fruit and nuts.

The best thing about decorating the sukkah (besides the obvious Jewish parent favorite of telling the children that it’s sooo much nicer than tinseling up a dead tree in the dead of winter) is the regional variety of traditional adornments. In California we strung cranberries and the usual oranges and lemons along with the requisite paper chains all of us remember from religious preschool along with a few redwood cones. Since the whole point (according to me) of Sukkot is to get back to the land, you know Savannah has to have its own unique vegetative offering for the straw ceiling: Peanuts and snap beans. No kidding. Isn’t that cool? They looked so pretty hanging there, but man, raw peanuts are a b*tch to string. At least they weren’t boiled; now that’s some nastiness.

In a fabulous convergence of traditional holiday and my personal hippie tendency towards worshipping nature, El Yenta Boy and I traveled to Flat Rock, NC this past weekend for the Southeast Women’s Herbal Conference to camp in the woods and learn about the medicinal and spiritual qualities of wild plants. (His was one of only three penises there – and the only circumcised one.) It occured to me while we were sitting in the grass eating our quinoa and bulghur salad and organic greens with 400 strong, Shekinah-fired women that our Jewish mitzvah of being outdoors and thanking God for the bounty of the earth is something much more primal and came long before the Torah. My decades-long experience as a tree-hugging dirt worshipper has brought me more wisdom than going to synagogue; call me a heretic, but I’m just one of those tactical, stick-my-finger-in-it types. El Yenta Boy, being more cerebral, made his own connections and asked every person there if they were Jewish. “But they love the earth just like we do; isn’t that Jewish?” Mmm, I love my smart, soulful kid.

As far as the other events I’ve missed blogging about, like the New York visit from everyone’s most unfavorite Iranian with the Napoleonic complex (“We don’t have homosexuals like you do”? Please.) and the legal judgment of Britney Spears as the Worst Wannabe Jewish Mother EVER (I’m praying for her, I am!) seem far away as the wind blows the leaves off the magnolias. Even the discovery of a Nazi war criminal practically in my backyard can’t bring me down as I smell the air shift into autumn, the best of all seasons. Isn’t it better to watch the leaves change than watching TV?

Are ya freakin’ kidding me?

Jews in the financial capital Mumbai are now looking into legal options to block the sale of the product line, the promotional material for which features swastikas, the Times of India newspaper said Sunday.

“We Jews believe that the best part of living in India is that it is a country that has never ridiculed us or harmed us,” said Jonathan Solomon, chairman of the Indian Jewish Federation.

The makers say “NAZI” stands for “New Arrival Zone of India,” while the swastika is also a commonly used Hindu symbol.

“It really does not matter to me who feels bad about it,” furnishing dealer Kapilkumar Todi was quoted as saying.

Last year, a restaurant in Mumbai — home to around 5,000 of the total 6,000 Jews in India — had to change its name from “Hitler’s Cross” following similar complaints.

And before you start thinking bedding manufacturers are only that backasswards on the other side of the world, remember this?