Studly Israeli heavyweight Roman Greenberg crushed his Russian opponent last week in Monte Carlo, but he’d better hit the gym if he wants to kick ass in America next week.

According to Ynetnews, the 24-year-old was sporting some tummy flab in the ring, though a boxing aficionado claims Greenberg “has the fastest hands for a heavyweight since Muhammad Ali.” Yeah, but even the strongest butterfly can’t float through lard, so let’s hope our Israeli hero skips the American Thanksgiving.

If you’re in the Miami-ish area or can figure out the whole PayPerView thing, the undefeated Roman is scheduled to fight at the Hard Rock Hotel in Hollywood, Florida on Dec. 1.

Glad to see the j. jokes page has kept its dark humor:

Hette had a heart attack and was taken to the hospital. While on the operating table she has a near-death experience, during which she saw God and asked if this was the end for her.

God said no and told her that she had another 30 or 40 years to live.

As soon as she recovered, Hette figured that since she had another 30 or 40 years to live, she might as well stay in the hospital and have the facelift, liposuction and tummy tuck that she had always promised herself. When she got out of the hospital, she even changed the color of her hair.

Some weeks later, as Hette was crossing the street after leaving the hospital, she was knocked over and killed by a car.

When she arrived in front of God, Hette was annoyed. I thought you said I had another 30 to 40 years!

Even more ridiculous than being the only Jew who hasn’t seen Borat, I incorrectly opined that everyone’s favorite Kazahk alter ego had taken over his creator. It turns out there’s still a regular guy under the cheap suit and he’s come up for some air: Rolling Stone has an interview with the real Sacha Baron Cohen (in excerpt form; for the full dealio, we’ll all have to shell out the newstand price.)

And just when you thought he couldn’t shock you any further, the man under the moustache reveals more surprises: He keeps kosher, has a bubbie who lives in Haifa and he’s kinda shy.

Yes, it’s still Jewish Book Month, friends, and the Arizona Literary Contest has chosen a Jewish-themed story for first place in its as-yet-unpublished novel category: Beginning a few months after Spain’s edict that expelled all the Jews, The Blind Eye weaves the tale of conversos in 15th century Portugal with a modern-day Cuban-American women in search of her identity.

Author Marcia Fine explores the dark history of the Spanish Inquisition and the miracle of Jewish survival while creating unforgettably courageous female characters in her fourth book. Her previous novel, Paper Children, chronicled three generations of Jewish women in the context of the Holocaust and a new life in America. The publication date for The Blind Eye has not yet been determined, though this distinguished award will likely motivate its widespread availability. I’ll keep y’all posted.

” Kickin’ beats, machete-sharp lyrics … would you expect anything less from our favorite Suburban Homeboy Eric Schwartz? I could kvell over this guy all day  there has never been any homage to the dreidel like “Chocolate Coins.” Among the rhyming gems: “I spun a whole in the linoleum and discovered petroleum” and “Don’t put it in your pocket it’ll melt, it’s gelt!”

…and other misinterpreted lyrics of popular songs can be found here. It’s quite amusing if you’re trying to look busy: For instance, when Bono crooned “She moves in mysterious ways,” some cotton-eared listener thought he said “Shamu the mysterious whale.” Baffling. Better is someone’s interpretation of R.E.M.’s “Losing My Religion”: “Let’s pee in the corner…let’s pee in the spotlight…”

I think I’ve got a good one to add: My son was listening to “his iPod” (really a cheapy combo pedometer/transistor radio that came in a bag covered in the logo of some pharmaceutical company that tries to lure doctors like my father-in-law into prescribing their drugs by giving them cheap swag  but shh, anything with headphones that plays music is an iPod, ‘k?) and the kid starts belting out Na na na na hey hey heeeeeey….ECHAD!

(“Echad” is “one” in Hebrew. Good to know the child remembers something from that $15K Jewish preschool education!)

After four or five choruses he yelled “Mom! Mom! It’s a Jewish song!” with all of the zeal of someone who had not yet learned that the people sitting quietly next to you cannot hear the music piping directly into your ears (such as the woman sitting next to me right now listening to her veritable, pink-encased iPod, pumping her arms and moaning “get my sexyback…” WTF is it with that song? Either I’m getting old, or Justin Timberlake deserves a bitchslap.) I mean, he was really grooving to it, waving his arms on the na na na na hey hey hey and pointing his finger up high on ECHAD!

Of course anyone who’s ever been to a high school football game knows the real version of “Kiss Him Goodbye,” but I will continue to let my child believe this American anthem is indeed a Jewish song for the sake of reinforcing his sense of belonging and identity. That, and my own personal amusement. When someone in his freshman year bursts his bubble, I’ll apologize and buy him a real iPod.

First Noah’s Ark, then El Yenta Man wonders out of loud if giraffes are kosher.

Obviously, his curiosity was motivated by something other than adhering to halachic code since 1) giraffe meat is hardly ever on sale at the Publix meat counter and 2) he was peeling and eating a bowl of wild Georgia shrimp when he asked. But he had a point: The world’s tallest mammal is a ruminant and has split hooves, so technically, it’s kosher. However, the prohibitive cost of giraffe slaughter and the animal’s feisty attitude are the rabbinical reasons we don’t serve it up on Pesach.

This is one those instances where I just diverge completely from the Judaism of yore. I don’t care if Elijah himself walked in my front door with a giraffe brisket and said “God says it’s cool! Eat up!”  I could never, ever consider these intelligent, gentle, silent, marvelously unique creatures as food. I totally and completely revere them.

You might call it an interspecies crush. Once I was at the Oakland Zoo, where only a small moat and fence separate visitors from many of the animals, and we were watching a male and female giraffe entwine necks and flirt as they’re wont to do in spring. After a few minutes, the female went off to check the food bin and the male turned his attention to me. Seriously  he noticed me standing there, turned around and looked deeply into my eyes. Then, without breaking his gaze, he walked slowly up to the edge of the water, brought that remarkable neck down to my level and stood face to face with me, looking at me like maybe he knew from somewhere and would I like to go back to his place for a drink?

We stood that way for about five minutes, me afraid to breathe and break the spell, until his girlfriend came over and nudged him in the rump. I could practically hear her saying “Whassa matter witchyou? I leave you for two seconds and you’re already roaming? Go ahead, see if you can climb that fence. Puh-leez, you think that short-necked hairless bitch’s got what I got? Uh-uh, you can sleep in the men’s pen tonight, buddy!” He followed her back to the feed trough, but I swear it, he gave me one last long glance. He might’ve winked, but I was too astounded to be sure.

But, oh, the G-Love doesn’t stop there: Last year the whole family visited Out of Africa Wildlife Park in Arizona, where you can ride in an open-air truck and observe them in a Serengeti-like environment. The guide handed out cookies and said we could hold them in our mouths if we felt brave. And you know I am, so I held the biscuit between my teeth (it tasted like the teething bricks I used to give the kids) and waited.

Soon enough, a male sauntered over to my side of the jeep, leaned down and deftly nibbled it away from my lips. OMG, I completely swooned  it was like my favorite celebrity had kissed me on the red carpet, except not even McDreamy could hold a candle to the tall, handsome thing this guy had goin’ on. It was such an extraordinary experience to smell his breath (funky, but much less offensive than a dog’s) and feel the flutter of his eyelashes (at least 2 inches long) on my cheek. I rate that kiss as one of the peak moments of my life.

So you see, the Talmud might say otherwise, but giraffe will never be considered kosher in my book. If stranded in the desert with El Yenta Man and a giraffe with nothing to eat, I confess I’d probably make hamburgers out of my husband first. Mostly ’cause the giraffe talks less. 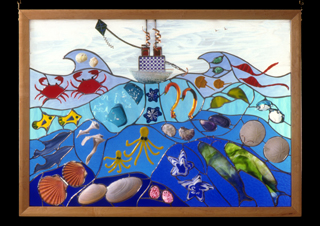 This morning Cranky Yenta Boy would not get out of bed. Instead of the excruciating Drips of Icy Water on the Chest method my mother used for slow morning rousers, I subjected the child to an old Sunday school favorite:

(You probably know how the story ends, animals in twosies twosies and all, but you can access the rest of the “Arky, Arky Song” lyrics here, or listen to Raffi’s version if you don’t currently have any particular melody stuck in your head or would like to replace the synapse-corroding “Sexyback” as today’s mental soundtrack.)

Anyway, upon checking today’s JBlogs, it appears the Great Flood was on other’s minds this morning: Jewlicious‘ themiddle posted this NY Times article regarding new geological information and coincidental anecdotes from different cultures that invigorate the theory that an asteroid caused the earthly mess.

When bloggers blog about the same thing spontaneously, we call it 100th Monkey Syndrome. It’s also what happens when you put two monkeys on an ark together for 40 days and nights.

Poor Jackie Mason  the deluded icksters of Jews 4 Jesus use his status as a Jewish icon to promote their evil cult in one of their design-challenged flyers and now a New York court says it’s actually legal.

Distinguished University of Toledo Professor of Law Emeritus Howard M. Friedman reports on his blog Religious Clause that Mason has lost his case against J4J:

The court held that a reasonable reader of the pamphlet would not have thought that Mason endorses the views of Jews for Jesus. It held that newsworthy events or matters of public interest are not covered by the privacy statute, and that the distribution of the pamphlets was constitutionally protected speech.

I’m no lawyer (much to mother’s disappointment,) but it’s not the “reasonable readers” that we’re worried about here. Anybody who accepts a pamphlet from J4J rather than shrieking “Back off, beeotch!” and then actually reads it instead of depositing in the closest garbage can is already a compromised individual.

And though Mason’s case was based upon privacy rather than copyright laws, a celebrity should be able to protect his/her own brand from hideous misappropriations implying that they endorse they don’t  especially something as seriously screwed as J4J. If Jimmy Dean sausage had used his picture in their advertisments, he would have won the case, right? That judge is either whacked on Oxycontin, an anti-Semite, or a Jesus freak.

Don’t take my windbag word for it  download the original pamphlet and decide whether Jackie got shafted. But beware if your hard drive starts getting glassy-eyed and quoting Scripture.

So…many…reactions…
How offensive…
How true…
Hey, Australian JGirls sure are cute…
Did I pay my Victoria’s Secret bill on time?
Do The Buggles know about this?

Hat tip to Shy Girl in the Jewlicious comments section…