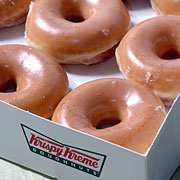 Last year I downloaded a Chanukah mix from iTunes and my husband told me that Adam Sandler is banned forever from our stereo.

So what to do about Jewishy mood music during our annual latke party?

The machers at Craig N Co come to the rescue with a new release: “Hannukkah Lounge” promises to be “an eclectic mix of smooth, mood-inducing holiday classics.” Call it “Jew-Age” jazz, if you will.

Knowing that any Chanukah celebration is incomplete without greasy fried things, Craig N Co is also giving away a coupon for a Krispy Kreme donut with every order.

No more “Chanukah Song” and an old-fashioned glazed? Sweeeet!

This is Amber Ridinger. Her extremely rich, ethics-deficient parents spent half a million dollars on her bat mitzvah party, which included the cost of hiring hip hop stars Ja Rule and Ashanti, who most likely had to be briefed on what a bat mitzvah actually is. (Amber herself was probably reminded repeatly by some well-meaning relative, but her bling was jangling too loudly.)

It was, in fact, Ja’s first brush with Jewish coming-of-age ceremonies. “I’m Uncle Ja,” he said, with his arm wrapped around a beaming Amber. “I’m really here just to scare all the little boys, the little 13-year-old bad boys that try to hit on little Amber. That’s why I’m here.”

That well-meaning relative definitely had a heart attack at that one.

The party also included a fashion show featuring Amber’s own designs. If they looked anything like what the little princess is wearing in this photo, there’s a post on GoFugYourself in her future!

I’m sure we’ll be hearing more from heiress Amber in the coming years when her parents finance her perfume line and try to keep her night vision sex tape out of the tabloids. Mazel tov, girl! 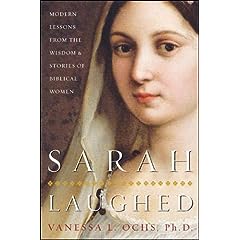 In response to Sarah Laughed: Modern Lessons from the Wisdom & Stories of Biblical Women by Vanessa Ochs:

For all the guff Jewish women get about being mouthy, theres a distinct lack of female voices in the Old Testament.

Take Jobs wife (please): She loses her home, her children are killed and her husband continues to praise the One who made it all happen, and all she can say is Curse God and die!

I dont know about you, but Im guessing her actual speech was longer, louder and a bit more specific about the curses.

You can read the rest of my my review in this week’s J.

Another retarded wintertime holiday intending to blend random parts of Chanukah and Christmas like a bad casserole? Fuhgeddaboudit.

On further inspection, however, the creators of Jewsmas don’t appear to be advocating the commingling of holidays, but are rather trying to protect them from dilution:

We know that Chanukah is not the Jewish Christmas! No, we must reclaim Chanukah for what it is: a celebration of freedom, faith and miracles from G-d. And to do that, we create a new holiday, the Jewish Christmas. From this time forward, each year on the first Saturday after Christmas, Jews and Christians shall gather together and celebrate Jewsmas … Now leave Chanukah the hell alone!

Fabricated traditions include the Dreidel Drinking Game (with the extremely alocoholic conconction Meshuganog) and proper mumbling of carols, which sound like good clean crosscultural fun, but cheese and chocolate fondue? Barf. Not to mention the “Ogling of Shiksas,” which crosses the wrong side of my feminism detector.

I’m going to give the benefit of the doubt that the site was created as a satirical response to all the other fake holidays  mostly because they’re not really trying to sell anything. (Well, they have t-shirts, but who doesn’t?)

Autumn Saturdays are a big deal for families in America; I guess one could say pee-wee soccer is practically a religion. But if you’re shomer Shabbos, your kids will never don “Earl’s Hardware” polyester jerseys and dribble down the field with the rest of the team.

To have to choose between shul and soccer could be one of the travesties of American Judaism. In Portland, Oregon, however, one group of observant Jews is thinking outside the box. Rather than relegate their kids to the sidelines, these parents appealed to the local league and got the games scheduled for Sundays. (Which I suppose means they can only play against non-observant Christians, but there’s more of them than there are of us.)

In related self-referencing, if my kids play soccer and I drive them to games on Saturdays in my beige minivan, does that mean I’ve become…a goy?

Shabbat Shalom, y’all  and I do mean ‘all’. Thanks for your eye time, catch you next week.

There’s only so many books and non-plastic toys out there that my children don’t already have, but I have one less gift to mull over thanks to Super Auntie Esther Kustanowitz (otherwise known as My Urban Kvetch), who’s in the know about simply all kinds of things (though I had to skip her spoiler post on “Lost” since I’m only up through Season 1.)

Call it Baby Mozart for Pupiks. Oy Baby began as a video to expose Jewish children to the sounds, music and symbols of Jewish life. Any product that serves the purpose of teaching Judaica AND giving parents a few minutes of downtime when their brilliant Jewish children aren’t asking questions about the nature of the universe and/or using scissors on the dog was bound to be a success.

A new version, Oy, Baby 2, is currently being birthed and is age appropriate for up to 5 years. Jewish musicians Craig Taubman and Rick Recht guest star, so not only will this video/CD be rockin’ fun for the whole family, it’ll actually be cool. (The blog has a sample of “Shalom Rav” with a “mystery” singer  has to be Recht. Am I the only one who chokes up hearing that song? Must be a case of camp nostalgia…)

It’s one thing to make a bra out of a yarmulkes, but yarmulkes out of bras? The Bramulke (it “gives a lift to any Jewish occasion”) ups the ante for cheeky holy wear.

You could have one heckuva laugh while everyone at your wedding wears your old B cups, which is just what the Bramulke’s creators did. Chutzpah at its finest, truly.

And here I thought ironic Jewish tees were on their way out…Congrats to JewTees.com for reviving the genre.

Funny how just the sight of it makes your skin crawl, huh?

But swastikas weren’t invented by the Nazis, only perverted by them. According to this Beliefnet article, the symbol has ancient roots in Hinduism and are drawn to denote “good luck.” (Guess that luck doesn’t apply to Jews, gays, Catholics, gypsies…)

I still hold out the hope that someday the swastika will reclaim its ancient significance and become a symbol of auspiciousness for everyone–not just Hindus. Popularizing the real meaning of the swastika in the West would, after all, be a sign that we’ve repudiated the Nazis and refuse to let them continue to hijack tradition.

Bhandari makes some excellent points while acknowledging the sensitive nature of the subject; it’s a good read, for sure.

However, I think this one’s tainted for eternity, honey. I really like that ‘Om’ thing, though.

(And just so y’all know, the image comes from Babad Bali, a Hindu site.)

Hmm…this article has been all over the wires, posing the question of whether all this media Jew love is going to help get people back into synagogue or inspire them to keep kosher:

A marriage of hip and Jewish that emerged in the late 1990s has redefined religious identity for irony-loving 20- and 30-somethings from New York to Los Angeles and beyond. They flock to all-night multimedia celebrations of Jewish holidays; fill nightclubs where Jewish storytellers are the headlining act; start magazines, journals and web sites  all while wearing a wide array of irreverent clothing. Among the edgier items is a bra made out of yarmulkes.

Not that I can lay claim to “hip” anymore, anyway. I drive a minivan now, remember?

While writing this blog about mostly silly aspects of Jewish life has certainly inspired me to explore some of the deeper, more difficult aspects of what it means to be a Jew, I’m not entertaining any illusions that you’re gonna run out and strap on tefillin after spending some with the Yenta.

But the article asks that weird question that no Jew I know can really answer: Are we a religion or a culture? Whether you’re going to shul and just wearing the T-shirt, a Jew is a Jew, nu?