Move over, Amber, there’s a new spoiled brat in town: The NY Daily Dish reports that the price of Elizabeth Brooks’ bat mitzvah was higher than the debt of a third world country, complete with $1000 giftie bags stuffed with new iPods (and not the cheapo shuffle version, neither.) The rest of the millions were spent on hiring huge-name acts to perform  most of whom hit their peaks circa 1985.

Elizabeth’s daddy, bulletproof vest manufacturer David Brooks, bought a Hennessey-swillin’ 50 Cent to perform on his daughter’s big day, but suspiciously, every other entertainer had a Top 40 hit waaay before little Lizzie was a twinkle in her papa’s eye. C’mon  there’s no way a 13- year-old girl likes Aerosmith, Tom Petty, Stevie Nicks and Kenny F*n’ G! Could it be that this was Daddy’s completely narcissistic (and nauseating) attempt to recapture his youth?

As much as I’d love to rip on Elizabeth, who can’t help but feel sorry for her? She obviously had nothing to do with the sins of her nouveau riche dad. Who knows  maybe the shameful excess of the event will drive her into the rabbinate.

Hat tip to the Yada blog. This joke can’t be new, but it’s new to me and hopefully to you, too:

In Jerusalem, a female journalist heard about a very old Jewish man who had been going to the kotel to pray twice a day, everyday, for a long, long time. So she went to check it out.

She used her investigative instincts and found the man, dressed in black with a tallis over his head, davening at the Wall. After he was done praying, she approached him for an interview.

“Sir, how long have you been coming to the Wall and praying?” asked the intrepid journalist.

“I pray for peace between the Christians, Jews and the Muslims. I pray for all the hatred to stop, and I pray for all our children to grow up in safety and friendship,” explained the man patiently as he folded his tallis.

“How do you feel, after doing this for 60 years?” pressed the reporter, tape recorder in hand.

If you like, you can talk to the Wall here.

Obviously, the Coca-cola logo emblazoned in Hebrew is not a new thing. In fact, I recall thinking it was rather gauche when I saw it the first time on a kid in my bat mitzvah class. No, the weirdness is that it’s on sale at Urban Outfitters, which means it’s achieved some sort of retro chic status.

I guess I really have no idea what’s hip anymore.

On the super icky side of today’s redneck watch, perhaps Americans have had enough of former Ku Klux Klan “grand wizard” David Duke, which is hopefully why he’s taken his ignorance, delusions and lies about Jews and Israel to more sympathetic ears  in Syria.

(Control much of American government? Kinky hasn’t been elected  yet. Then you’re really in trouble, schmuck!)

Syrian parliament member Muhammad Habash (reportedly) said that Duke “has given us a new and very positive view of the average American.” 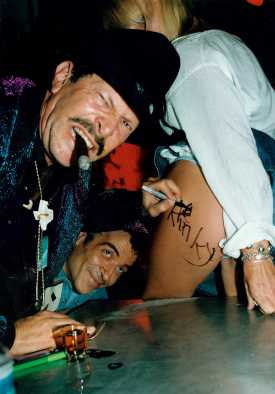 If success is measured by publicity, Kinky Friedman should already have the votes to be governor of Texas. The world’s most famous musical redneck Jewboy now has his very own reality TV show chronicling his political adventures, currently airing on Country Music Television.

“Go Kinky” is directed by David Steinberg of Curb Your Enthusiasm, which means it’ll be at least as entertaining as cowtipping at midnight.

(Actually, “midnight” is the operative word there, since the two pilot episodes are being aired at the ungodly hour of 1a.m. Better to hide the fact that you’re actually watching Country Music Television.)

The Yenta is spending a highly “traditional” Thanksgiving holiday in Scottsdale, AZ with all members of the immediate family  including the Bubbe, who we roll in from the nursing home every day so she can bask in the glow created by sparks of toys banged together by shrieking great-grandchildren.

My parents, so happy to have not only my whole mishpotech but my Brother-the-Surgeon in town, cooked a sumptuous, all-American meal straight outta Betty Crocker complete with marshmallow-encrusted yams and cranberry sauce from scratch. (This was, in fact, the first time I have ever known my mother to cook anything at all since the microwave was invented.)

We’re not anywhere near halachic-grade Jews (although no pig has ever set foot, ear or chop near this kitchen) and even though our haimesh relatives moved back to Jerusalem last summer, my folks have gotten used to ordering a kosher turkey. The Surgeon got carving duties, natch. When I commented on the precision cut of the breast, he shrugged and said “same as a mastectomy.” I ate dark meat.

Anyway, I find it interesting that our Jewish family, the oldest one of us a Polish immigrant, knows how to follow the traditions and foods of this American holiday as well (and better than, in some cases) as our Jewish ones. After all  Christian pilgrims swapping maize recipes with the natives?  not so much our history.

Maybe it depends on whose version of history you’re reading: The first Jew to come to America, a Czech metallurgist in service to Britain, arrived here in 1585 and kicked early settlements into gear by discovering how to smelt copper. And those pilgrims? It’s been posited that the first American settlers were actually Jews.

Maybe it’s a stretch, but as an American Jew, it’s important to know that American history is American Jewish history, no matter what those intelligent design people want to teach your kids in school.

And whether you’re eating bird or serving up a nice vegetarian curry, most everyone has a long weekend off. Here’s to enjoying time with the people you love.

*Photo of Jewish poultry farmer plucking a turkey for market circa 1940 c/o Library of Congress.

Michael Jackson has once again invoked the ire of the Anti-Defamation League for making anti-Jewish slurs.

ADL director Abe Foxman (a very foxy man and one of my personal heroes), has taken the world’s most famous pedophile to task for an voicemail message recorded two years ago in which Jackson says: “They suck … . They’re like leeches. … I’m so tired of it. … It is a conspiracy. The Jews do it on purpose.”

A few years ago, Jackson showed his anti-Semitic feathers in the lyrics of “They Don’t Care About Us,” which included some really ugly words that he changed under pressure from Jewish groups.

Said Foxman in a statement earlier in the week:

“Michael Jackson has an anti-Semitic streak and hasn’t learned from his past mistakes. It seems every time he has a problem in his life, he blames it on the Jews.”

Careful, Jacko  it’s those conspiritorial Jewish lawyers who’ve kept your skinny, Jesus juice-swillin’ pervert ass outta jail. You’ll find that most cultures would have cut your unmentionable off for buggering the youth. BTW, how’s the weather in Dubai?

*Props to that honorary Latino Jew at ChicoTown for the graphic.

Actually, it’s all Jewish books, all the time at Nextbook.org, “gateway to Jewish literature, culture and ideas” and a nice place to spend some time that won’t rot your brain.

A sure way to enliven your intellectual Jewish synapses is Matthew Brogan’s interview with poet Robert Pinsky, author of Life of David.

In contemplating David  king, soldier, artist, rebel  and his complex relationship with the Almighty, Pinsky hits the confusion and guilt of diaspora Jews spot-on:

He is perhaps the ultimate illustration that no generation invented the tangle. The supposed stability of some Absolute Zadeh, the pure and undiluted Real Jew, is unreal. Contemplating the David story reminds me how every Jew can find his own point on an infinite, glorious spectrum of Jewishness.

This may be misfiled, as I haven’t read the book yet, but I will remember this quote  and the image of the great warrior king suffering over the meaning of Jewishness just like the rest of us.

Newsday.com reports that a gay Jewish man may go ahead with his harrassment lawsuit against the Salvation Army in Manhattan. Zachary Logan, who counseled 9/11 survivors, has filed claims that manager Michelle Pallak made inappropriate references to his religion and sexuality and then fired him when he complained.

The Christian-based Salvation Army’s lawyers thought they might get Logain’s case thrown out because theirs is a religious organization, and is therefore “exempt from religious bias claims.”

Wha’? The Salvation Army believes that because they get a tax break from the government for being a charity their employees can spout bigoted, hateful nastiness anytime, anywhere?