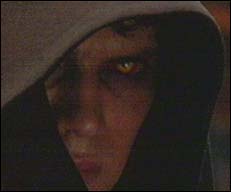 We haven’t made on the Revenge of the Sith train as of yet, in spite of the facts that the film and all its hype were dreamed up a mere eleven miles from our front door and Lord Lucas himself lives a few neighborhoods over. (We see him in town sometimes eating eggs at the Koffee Klatch. Our friends in the service industry say he tips ten percent. Every time.)
It’s not that we won’t see it eventually in the privacy of our own livingroom (if only to muse how much our bubbie has started to look and sound like Yoda in the past five years), but we’re just, shall we say, not that into it. Certainly not enough to have a “Star Wars Shabbat” like these geeks. But to each his or her own.
Shabbat Shalom!

Our favorite rebel rabbi takes on Batman Begins and bashes the commonly-believed notion all it takes to dissolve evil is a little love.
Simply put, our society is one that has a big problem with hating evil, believing that those who hate — even if its murderers and terrorists that they hate — will inevitably be corrupted by their hatred. Hatred is always a bad thing, even when directed at the cruel, the wicked and the truly evil. But will society really muster the determination to fight evil if it doesn’t hate it?
The full article explains why hating your neighbor ’cause he likes to play with power tools on Sunday morning is wrong, but hating motherf*ckers like Osama and the pervert with the notebook isn’t just okay, it’s necessary. Food for thought.
Hat tip to Jewschool.

After 50 Shekel’s public conversion to Jews for Jesus, who could blame mainstream media for turning the Jewish rap genre into a joke? But instead JPost instead pays respect to Jewish rap with glowing reviews of Ju-Tang Clan‘s new album and Oakland’s Original Jewish Gangsters, featured right here last week. We’ve had the latter’s CD spinning in our hard drive all week long and we testify that Jewish hip hop is more than a gimmickit’s here to stay, y’all.
And while we’re on the subject of Jewish music, we found Eden recently. These three cute frum dudes playing “Jewish mainstream hard rock” straight outta Brooklyn haven’t been around long, but their catchy Matchbox 20-ish, Third-Eye Blind sound and soulful lyrics have us waiting for a West Coast tour. Check it out!

Look, it’s not like we want to hate Wal-Mart, but they just make it so easy.
(Originally posted at WeirdJews2.)

It’s been quite a month for Jewish genetics: First, scientists have found chromosomal proof that we’re smarter, which your mother already knew. Then European Jewish women may be denied access to health care because of their genetic predeliction for breast cancer.

And today we came across a study that suggests that our genes are responsible for how we handle our strong drink. It seems Jews have a higher prevalence of the gene ADH2*2,
a variation of ADH2, which produces a more active form of alcohol dehydrogenase, the enzyme that catalyzes the first step in alcohol metabolism. However, explains lead author Deborah Hasin, Ph.D., from Columbia University and the New York State Psychiatric Institute, “the exact reason why ADH2*2 tends to discourage heavier drinking isn’t known.”
We’ve always heard that “our people” don’t develop alcoholism, but maybe that’s because those with alcohol issues are better at keeping secrets. And of course, getting drunk is pretty much built into Judaism.
But perhaps our little mutated ADH2 is responsible for our inablity to smell Southern Comfort without projectile vomiting.

Unless you’re one of the lucky few sittin’ phat, in which case you should buy one for your secretary, nanny, personal trainer, receptionist and/or mother. Designed for A Yoga Life by Gail Cooper.

With plans to evacuate Jewish settlers in the West Bank soon to be activated, it just makes sense that someone would create a game for it. “Wild West Bank”, launched by a coalition calling itself “Back to Israel” was downloaded 20,000 times in its first three days, according to Ha’aretz. The challenge a player (acting as an Israeli sheriff) must face is to take down settlements, while settlers constantly set up new communities as soon as they’re removed. Try and drag thesettlers back to Israel: as soon as you do, more homes pop up on the same spot. It’s a game that’s impossible to win. Oy.

This cute film may be a bit off-topic, but anything that combines talking vegetables with Star Wars satire to illustrate the dangers of genetically modified foods is kosher by us.
(Graphic c/o Ha’aretz.)

Holocaust survivor Ludwik Wrona, an 85 year old Polish man imprisoned at Auschwitz the very day it opened for business in June 1940 (the Nazis gave him the number 457,) died last week on a train trip meant to commemorate the 65th anniversary of the death camp. “The Train of Remembrance” was to take survivors and their families to the site of the concentration camp where as many as four million Jews and non-Jews were murdered during Hitler’s reign. The Polish Press Agency reported that Wrona was “overcome by the emotion of the trip” and died en route.
Certainly for some people, returning to the site of such trauma can be cathartic and vital to the commitment that the world must never forget what happened in Europe, but anyone who survived the Holocaust is old enough now to be excused from such dramatic exercises in remembrance, don’t you think?
Our sympathies go out to Wrona’s family and may he rest in peace.
(Photo c/o http://www.tertiomillennioseminar.org.

The Wal-Mart public relations genius responsible for the newspaper ad that compared zoning laws meant to protect small businesses with Hitler’s denial of human rights has resigned.
The Washington Post reported last week that Peter Kanelos, Wal-Marts community affairs director for Arizona and Southern California, oversaw publication of an ad in the Arizona Daily Sun that was part of a campaign to defeat a ballot initiative in Flagstaff seeking to halt Wal-Marts expansion. The ad, which featured a 1933 picture of Germans tossing books on a bonfire, sparked criticism from the Anti- Defamation League and members of Congress.
We doubt Mr. Kanelos will be unemployed for long; the Scientologists probably already put together a sweet benefits package for him.
(Frowny logo c/o Portland.indymedia.org.)