Atid Maor, a 20 veteran of Israel’s secret service Shin Bet, has hung up his weapons to open a kindergarten center in Tel Aviv. He says it has been his lifelong dream “to work with children, teach, change nappies, prepare breakfast and read stories.”
No word on whether Vin Diesel has signed on play him in the movie version.

The U.S. Supreme Court ruled this week that it is perfectly acceptable to display the Ten Commandments on government property in Texas. But not in Kentucky. Or wait, is it the other way around? Whatever. Like, who even reads boring monuments about something the Lord said to Moses like a bazillion years ago anyway? Golly, maybe Dr. Laura can clear it all up for us.
(We thoroughly enjoyed the three seconds it took to rip off this photo from the The Foundation For Moral Law.)

A Biblical-themed amusement park opened in Eilat last week, promising to “convey to visitors an experience of a voyage in time through caves quarried in the rock, sailing through King Solomon’s halls and an abundance of interactive experiences.”
It does indeed sound like a magic kingdom: King’s City features the aforementioned boat ride, a high-tech 3-D theater to screen films based on the kings and queens of the Torah, a “cave of illusions” that sounds like a multi-million dollar version of a carnival fun house and an underground cave where visitors can watch more Biblical history.
The park is expected to boost tourism for the beach city of Eilat (also known to those who have gone topless and smoked weed on the beach there as “Sin City”.) Ironically, the city was invaded by swarms of locusts while the park was under construction.
Maybe the souls of the ancestors don’t approve of the chozzerai that’s bound to follow; we think a clip-on beard with your name embroidered through it would be an excellent souvenir.
photo c/o YNetNews.

It’s time someone told the truth, nu? If you dig it, read the song lyrics or download the MP3.

In our past incarnation as a Volkswagon-dwelling, fuzzy-pitted vegetarian hippie chick, we often ran into folks who spoke to us of a lovely, wonderful experience that happened every summer since 1972 called The Rainbow Gathering. Though we never made it to a “Gathering” (the VW broke down in NoCal and we’ve never left) we feel a certain kinship with our community-minded brothers and sisters who set up camp in a different national forest each year to celebrate the things our society seems to have forgotten.
Since it’s a spiritual gig, it makes sense that a hard-working group of observant hippies have set up Jerusalem Camp, complete with kosher organic kitchen and Torah study under the trees. Man, we wish we had the gas money to schlep out to West Virginia for July 4 weekend. 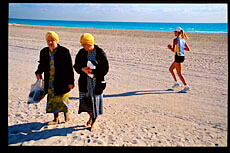 According to a new survey, the Jewish population of Miami has declined by 15 percent since 1994 reports JTA.
Some 31 percent of the 113,000 Jews in Miami-Dade County are foreign-born, according to the survey, conducted for the Greater Miami Jewish Federation. While we are a smaller population in Miami-Dade County since the last study was conducted, the percentage of people who have lived here for 20 or more years has increased, said Michael Adler, president of the federation. That speaks to the stability, deep roots and connectedness in Miamis Jewish community.
Does this mean Miami is no longer the retirement playground where Jews go to sit in the sun and not pay income tax? Or that the swingin’ Jewish singles scene is too much fun to produce offspring?
If the Jews aren’t going to Toronto and Miami anymore, somebody let us know where the next J hotspot could be so we can get into the condo market early!

In a new report on CJjews.com, it looks like our Jewish neighbors to the north are in serious need of a boost in their population growth. In Canada, it seems that Jewish communities are not holding on to their numbers very well due to emigration, the elderly passing away, and the low birth rates. CJnews.com explains that

 the census found that Canadas Jewish population rose by a modest 3.5 per cent between 1991 and 2001, to just over 370,000. It was one of the lowest rates of growth among religions and other ethnic groups, and sounded alarm bells among communal leaders on the need to increase the Jewish birthrate and boost immigration.

You hear that Canadian Jews? Time to start shaking up; post your profile on Jmerica and get busy, your community is counting on you.

As if Hitler didn’t do enough for Western civilization, an Italian newspaper now says that he is the creator of the inflatable sex doll. YNet reports that the Fuhrer commissioned a Danish doctor to develop a five-foot nine blonde, blue-eyed plastic female likeness with “large breasts and lips” and holes in all the right places in order “to serve the sexual needs of the German fighting man” who might otherwise go break down and find some foreign booty, thereby polluting the Aryan race. Hitler never got his dream girl off the assembly line, however, since the Dresden factory where the surrogate sex slaves were to be produced was bombed by the Allies.

Honestly, this story is just so nasty we don’t even know where to begin. It may not even be true, but the damage on our psyche has been done.
Tip o’ the cowboy hat to News For Members Of The Tribe. 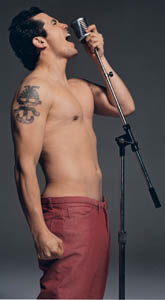 Latino superstar John Leguizamo (who did a turn as one of our favorite on-screen trannies ever) gives an interview for Newsday.com where he discusses how he and his Jewish wife have swapped stereotypical qualities:
She likes to go to bars and hang out with friends constantly. And a lot of times I like to be alone, hang out with my music, read a book. So that would be more my Jewish intellectual side, being alone, and her loving to be a party girl, going up there and rocking the parties and stuff.
They say married couples begin to look alike after awhile, but cultural cross-dressing? Very progressive. 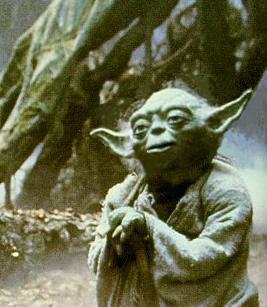 No, we didn’t join the Sith throng this weekends, but we thoroughly enjoyed this tongue-in-cheek treatment by Adam Wills, republished in J. Weekly. Wills lays a Jewish lens on the whole Star Wars bubbeminza and shows us just how much we don’t know, like the fact that the Hebrew on Dark Vader’s chestplate may (or may not) mean something and that Yoda’s name translates to “one who knows” in our ancestral language. Add in ass-kickin’ Jewesses and C3PO’s chair-lifted hora, and you’ve got enough material for a Jewish geek convention.
Says Wills: Even if the Star Wars saga wasnt written specifically with Jews in mind, the theme of good versus evil set in an alien universe speaks to the American Jewish experience.
When we finally do see the last three (or first three, whatever) films we’ll be looking for more clues that George Lucas secretly wishes he were one of the Tribe.