Residing in one of the world’s highest real estate markets as socially insignificant renters, we often find ourselves steeping in a nasty tea of envy and resentment as we track even the smallest, claptrap shacks selling for more than half a million. We admit that the green-eyed monster of jealousy has driven us to wanting to throttle anyone gleefully announcing their fabulous mortgage refinancing or raving about a “great deal” on a 3 bedroom fixer-upper for under a million. As much we want to heed the tenth commandment and the Pirkei Avot (Ethics of The Fathers), we struggle with the human condition of having less than we feel we deserve.
So we were soothed and inspired by

Emuna Braverman‘s essay “Eaten Up With Envy” at Aish.com that reminds us that “The Almighty gives each of us exactly what’s appropriate. If we were meant to have that home, spouse, child, career — we’d have it. He didn’t forget about us. And we won’t get more by stomping our feet, crying and throwing a tantrum.”
Man, she’s so right. Instead of keying our neighbor’s car this morning, we’re concentrating on counting our blessings that since we don’t own our home, the rotting roof and creaky septic system aren’t our problem. Thanks, Hashem.
Jealous much? Read the whole article.

We dissed Gwen Stefani for looping the modern Jewish anthem “If I Were A Rich Man” into her thumpy dance club track “If I Were A Rich Girl,” thinking the guy who wrote the song would be twitching in his grave. Well, it turns out that not only is that guy still alive, he just loooves Gwen’s sample skills. In a story from last week’s Jpost, one of Fiddler On The Roof‘s original composers, Sheldon Harnick, age 80, says “The song’s fun, catchy, engaging, in good taste and we’re really pleased with it.”
We concede!
(We saw it first at Jewlicious, while we’re givin’ out props)

Famous spoonbender Uri Geller has voiced his support for his friend Michael Jackson, telling reporters that the accused child molester must be innocent of any wrongdoing. “I told them that God forbid I’m wrong and he is convicted, then my belief in human nature and my own ability to judge character will be shattered to the core.”
Seriously, if a psychic guy couldn’t detect the pedophile under the glove, who could?

A credit card that won’t work on Shabbat is scheduled to launch sometime this month in Israel. The creators of the shomer Shabbat card hope to counterbalance the shops and businesses that are choosing to remain open on Saturdays rather than observe the day of rest from handling money and shlepping shopping bags. If the haredi population can make their voice heard through the cash register, perhaps this will inspire more businesses to get back to Shabbat.
Observant or not, it would behoove all of our finances to give the plastic a rest one a day a week, nu?
A Peaceful Shabbos to all, Jmerica!

Thanks, Jewlicious, for alerting us to BaconWhores.com, where you can schedule an appointment for a Hooters-esque pig meat experience right in the comfort of your own home. Just the thing if you’re feeling nonkosher, sexist AND white trash!
So do you think there’s a market for Falafel Sluts? 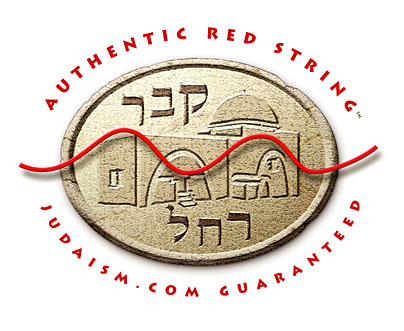 Fed up with the dismissive treatment the media has given (guilty!) to the Kabbalistic practice of wearing a red bendel to ward off the kenina hora (evil eye), a Pittsburgh businessman has independently produced a short film to cleanse our current perceptions of last year’s most popular accessory. Instead of sneering at the gaggles of Midwestern Madonna-wannabes, Shlomo Perelman, owner of Pinker’s Judaica Center, believes Jews need to educate themselves about the significance of Rachel’s tomb and reclaim this ancient tradition as their own. “It’s been co-opted by Hollywood types and it’s been adopted by mass-market, New Age people,” he says. “It’s not being linked at all to Judaism.”
In the film the narrator reminds us that the “authentic” red string is “not Kabbalistic magic, it’s a way to connect, to have Rachel in mind as we go about our daily lives.”
To watch the short, informative and inspiring film at Judaism.com, click here.

Most of us consider President’s Day simply a day off or an inconvenience, depending on whether you’re a student/federal employee or a self-employed shlub trying to cash a check. But here’s a reason to think kind thoughts about our country’s forefather this Monday: In the first documented correspondence with the Jewish community, newly-elected head of state George Washington responded to Savannah, Georgia congregational leader Levi Sheftall, who thanked George the Good on May 6, 1789 for “enfranchis[ing] [American Jewry] with all the privileges and immunities of free citizens, and initiated us into the grand mass of legislative mechanism” with the heralding of the U.S. Constitution.
Washington’s response: “May the same wonder-working Deity, who long since delivered the Hebrews from their Egyptian oppressors, planted them in a promised land, whose providential agency has lately been conspicuous in establishing these United States as an independent nation, still continue to water them with the dews of heaven and make the inhabitants of every denomination participate in the temporal and spiritual blessings of that people whose God is Jehovah.”
Such a nice sentiment. Of course, 300+ years later the same words would probably get him impeached.
Read Washington’s whole letter to the Jews of Savannah, published in the Jewish Ledger.

Fired University of Georgia cheerleading coach and “good Christian” Marilou Braswell continues her protest that she discriminated against Jewish cheerleader Jaclyn Steele when the senior did not participate in New Testament Bible studies at Braswell’s home with the rest of the squad. Braswell is just shocked that playing favorites according to religion got her canned and says she knows in her heart she did nothing wrong and that she “did nothing but love” all the cheerleaders, regardless of their religion. She’s calling her fight with the school’s athletic department “God’s battle” and compares herself to the Biblical David: “This situation is my giant.” (Wow, all that studying’s really paid off, honey!) The unemployed coach has decided the Christian thing to do when confronted with one’s own discrimination is to sue, so Braswell filed a federal suit against UGA Board of Regents, UGA President Michael Adams and athletic director Damon Evans last fall. No trial has been set.
We smell a tragicomic cable movie in the making- we’re thinking kosher cutie Alicia Silverstone as the wronged cheerleader, but who could capture the nuanced idiocy and bad make-up of Marilou Braswell? Here’s one suggestion; post yours below.

Any of you gentlemen think you might woo Caprice Bourret with a candlelit romantic evening meal? Forget it. The svelte supermodel told the Jewish Chronicle in order to keep her girlish figure “I don’t eat anything after 5pm. Not a thing.”
But don’t distress, maybe you can arrange a bagel and lox brunch binge!