We don’t know about y’all, but we didn’t build a sukkot in our backyard growing up and neither did any of the other Jewish families we knew. We did our share of lulav-shaking back in Hebrew school, but building and eating in a outdoor booth at home meant inviting a golf ball injury to the head. It must be pretty cool to live in a neighborhood like Borough Park, NY, where this photo was taken (c/o Satan’s Laundromat.) We’d love to get a little more Jewish for the Festival ofSukkot, but if we could afford one of these fancy readymade numbers, we’d be paying a mortgage instead of rent. With our paltry carpentry skills, we may have settle for the aforementioned cardboard box. Suggestions welcome. In any case, we’re always down for the food. Hag sameach, everyone!

Here’s an in-depth look at our new golden boy, Igor Olshansky, from Ha’aretz.
“Olshansky is a hulking 6-foot, 6-inch, 315-pound athlete who can run 40 yards in less than five seconds and is being compared to some of the best defensive lineman ever to play the game. A rookie with the San Diego Chargers, who won their opening week game 27-20, not only is Olshansky the first Jewish athlete from the former Soviet Union to play professionally in the NFL, he’s also the first NFL player from the Soviet Union – period.”
We’re looking forward to seeing what this kid can do!
In other sports news, some guy has written a book about the anti-Semitic origins about the Red Sox’s inability to win a World Series since Babe Ruth was traded to the Yankees in 1920, otherwise known as the Curse of the Bambino. Harry Frazee, the greedy Red Sox owner who sold the Babe to New York, has been mistakenly thought to be Jewish all this time, and somehow this relates to everyone hating him for killing the Sox spirit. Let us know if you can make heads or tails of it.

Why won’t director Mel Brooks be shooting the remake of The Producers in Toronto?
“The bagels, just the bagels alone,” he said. “You go to Toronto, they’re mushy.” Instead, the filming will be in done in New York, where true boiled bagels rain from the sky from cream cheese clouds.
The Producers: The Movie Musical will star Nathan Lane and Matthew Broderick, who headlined in the Tony award-winning Broadway show that was based on Brooks’ original 1968 screenplay starring Zero Mostel and Gene Wilder. Brooks has also brought in Nicole Kidman and Will Ferrell to round out the cast, so you know this remake just may be as hilarious as the original.
Back on the subject of bagels, let us just say that they’ve been co-opted from their Jewish origins so badly here in Northern California (think spelt) that we’ve switched to English muffins.

The artist formerly known as Cat Stevens was deported back to Britain from Washington last week after his name appeared on the U.S. no-fly list (how he was allowed to board the plane in the first place remains the future reason for some underling’s imepending unemployment.) Yusef Islam is suspected of having ties to terrorist groups, but Jewish leaders in the UK swear the guy’s all about the love.
However, the Canada’s National Post reports that a videotape exists of Cat/Yusef making some not-so-nice references to Judaism at a Canadian Hamas meeting in 1998 (link c/o Jack Be Nimble.)
So, is the guy a terrorist or a moderate Muslim peacenik? More importantly, will we still be able to enjoy listening to “Moonshadow” without a discomforting twinge?

According to E! online, the Egyptian government has seen to it that our beloved Maddonaesther will never see the Sphinx.
“According to published reports, Egyptian politicians have moved to bar the pop goddess from entering the country because of her recent visit to Israel and her devotion to Kabbalah. The fact that Madonna has no immediate plans to visit pyramid country apparently did not deter members of Egypt’s parliament from issuing an order to never issue a visa to the singer sometimes known as Esther.”
Sheesh, we could understand protesting a concert or something, but banning her from the whole country just because she’s (kind of) Jewish seems weirdly dramatic. Isn’t Egypt supposed to be a “friendly” Arab neighbor, or at least one of the not-so-insane ones? Is Egypt taking an active anti-Semitic stance here or is it just opposed to Kabbalist quasi-Jews who travel with overzealous bodyguards and an entourage of 2000 people? Wouldn’t it actually benefit Egypt to bring Madonna and her zoo to lubricate the local economy? My, my, this Kabbalahpalooza mishegoss has gotten rather political. What if the Kabbalah Center’s giant peace extravaganza instead ignites Armageddon?!
(That’s us being weirdly dramatic.)

One of America?s premier MOT?s, Al Franken, is taking his successful national radio/TV show, The Al Franken Show, on the road. Broadcasting on both Air America Radio and on the Sundance Channel, Al mixes politics with humor in segments such as the ?Oy Oy Oy Show? (set to Israeli music) and his infamous ?Flipity-Flopity? routine. Franken has already beaten talk radio veteran Rush Limbaugh in the Arbitron ratings and hushed nay-sayers who assumed his style wouldn?t work on the airwaves. Together with co-host Katherine Lanpher, Al?s taking the country by storm and you heard it here first! (Click here for Tour Dates) 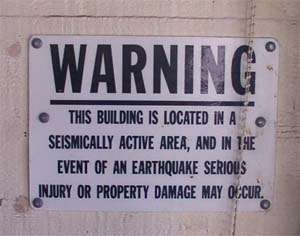 Our East Coast Jmericans have battled with wicked bad weather for the past month, leaving the Left Coasters with a feeling of relief that even though the Big One may be coming, at least we don’t have trailers flying through the air every other day. Well, this morning a pretty f*ing big one hit Central California, with aftershocks felt from Sacramento to Santa Ana. And up in Washington, Mount St. Helens is currently shaking like a Polaroid picture with tremors rocking the crater as much as every two minutes.
Say, tornado season doesn’t start until spring! We hear Sukkot in Kansas is lovely this time of year.

Laugh all you want, but Barry Manilow is cool again. As far as we’re concerned, there was never a time when he wasn’t. Should he make out San Francisco way, we’ll be there in the orchestra seats next to the fifty-something ladies throwing their panties onstage.

We are so into this new show, Housecalls, on Discovery’s FitTV, and not just because it stars Mark Lebos, the buffest, smartest Jmerican around. Mark and his co-host, Shaman, pay visits to real people in their real homes (no Spandex allowed!) and design practical exercise programs to be done in between loads of laundry, putting the kids to bed and *ahem* shoulder-slouching sessions in front of the computer screen. Most of FitTV features a bunch of shiny plastic people grinning their way through jazzercise on the beach; us couch potatoes appreciate the reality of broom handle lunges and water jug tricep extensions. Think of it as “Fit Eye for the Fat Guy.”
Check it out Mondays at 8pm if you’ve got Discovery’s FitTV on your dish or box; otherwise, call your cable company and request it.

They usually elicit eye-rolling or an exasperated snicker from us, but we finally found a Jewish joke that made us laugh. From J., the Jewish Newsweekly of Northern California:
“Just after the High Holy Days, the rabbi noticed little Alex was staring up at the large plaque that hung in the foyer of the synagogue. The plaque displayed names, with small American flags along its edges.
The 7-year old had been staring at the plaque for some time, so the rabbi walked up, stood beside the boy and said quietly,