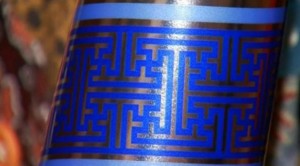 A SoCal bubbie got an icky surprise when perusing the Chanukah endcap of her neighborhood Walgreen’s this weekend:

Cheryl Shapiro was admiring a silver and blue roll of wrapping paper with her grandson when she realized that the blocky modern designs really, really looked like swastikas.

Like any good Jewish grandma, she expressed outrage and demanded that all the rolls be removed.

“I came home and I spoke to my rabbi. He couldn’t believe it,” Shapiro told her local NBC News affiliate. “I’m still very upset about it, that something like this could be on the market.”

The origin of the design remains a mystery, but expect Walgreen’s to come out with an apology later today. (Guess they’ll have to pull those all those yellow star garlands, too?)

I’ve been staring at the photo all morning, and I’m torn. On one hand, I’m thinking some graphic designer in Bangladesh had too much chai tea and simply got a little too aggressive with his M.C. Escher aspirations. Then again, swastikas.

We Jews tend to be sensitive to such things, but professional provocateur Perez Hilton says it’s up for discussion.