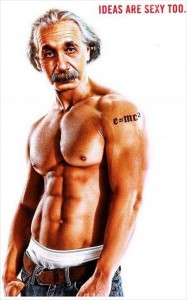 As if General Motors didn’t have enough problems with the ink on the bankruptcy papers still fresh and a bunch of pissed off Union workers with lawyers and chains at the ready, now they’ve got the Israelis on their tuchus:

The Detroit auto company has been slapped with a lawsuit by Hebrew University in Jerusalem for the unapproved use of Albert Einstein’s image in this ad that ran in the September issue of People magazine.

Hebrew U has overseen the usage rights to Einstein’s publicity since the physicist willed them to to the school after his death in 1955 and has shilled out his frizzy-haired image plenty of advertising campaigns over the years, including sodas. But they draw the line at a freshly-inked Al slouching in his Calvin Kleins:

“The tattooed, shirtless image of Dr. Einstein with his underpants on display is not consummate with and causes injury to (the university’s) carefully guarded rights in the image and likeness of the famous scientist, political activist, and humanitarian,” wrote Hebrew University lawyer Antoinette Waller.

I’m sure the ad man who created it (though I guess it’s equally plausible that a woman could have come up with such juvenile irony) thought Photoshopping a smart head on a ripped body was a clever way to associate GM’s brand with some sort of intellect. But someone should’ve told him or her that while some ideas might be sexy, but that doesn’t mean they’re good ideas. And doesn’t such a campaign run the risk of backfiring for pushing intellectual elitism? After all, you’re marketing to an audience that buys Chevys.

Personally, I don’t need to see Albert Einstein in his skivvies to think he’s hot — his quest to unify the world’s political theories so that all the stupid warmongers could stop posturing once and for all has always been swoonworthy enough.

One thought on “Einstein in His Undies”