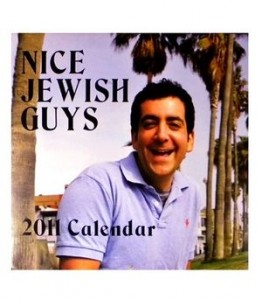 Generally, I don’t do wall calendars. Most of them seem to feature kittens or half-naked photos of neighborhood firemen and such images do not help me reflect positively on the sucking passage of time that leads me closer and closer to my own mortality. Besides, I use my iPhone.

But, this, THIS is worthy of wallspace and any kvetching from El Yenta Man about how even little tiny nails make holes in the plaster. The Nice Jewish Guys Calendar is the brainchild of NJG Adam Cohen and features fully-clothed eligible bachelors who like Weird Al Yankovic and hipster dive bars and possess just the right amount of self-deprecation and of course, the absolutely fundamental quality in a sexy man: A sense of humor.

All the singles ladies should be swooning, I’mma tellin’ ya.

But “nice” doesn’t just mean they’ll pretend to like your new chop haircut: The NJG calendar donates its proceeds to charity and recently wrote a big fat check to Mazon.org, a Jewish hunger relief agency “that allocates donations from the Jewish community to prevent and alleviate hunger among people of all faiths and backgrounds.” Tzedakeh is HOT, people.

It’s been selling like hot latkes after a BBYO dance (rumor has it that it’s HUGE in assisted living common rooms) but there are still a few 12″x12″ units to be had. January’s not even over yet, so take down that hideous Garfield calendar and pass 2011 with some guys who think nerd glasses are sexy and would never, ever leave the seat up.

“Like” Nice Jewish Guys on Facebook; they’re hilarious (of course they are!) The calendar’s available at ModernTribe.com. 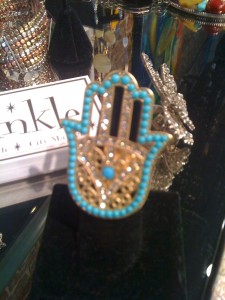 To soothe my New Year’s blues, I popped over to City Market on my lunch hour yesterday to visit my favorite accessories shop in the whole wide world Twinkle.

Proprietor Joa Kelly has always impressed me with his facile command of Yiddish words (second only to Brian Williams as my favorite shaygetz who can rock the mamaloshen.) Even so, it was an unexpected delight to see this fantastic hamsa ring on display, all shiny and sparkly in its Jewishy glory.

Of course, it looks even better on my hand: 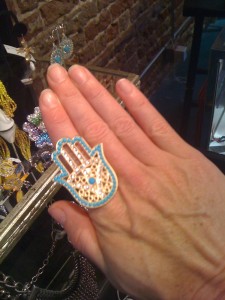 A wonderful way to bling in the New Year, nu? Comes in black, too.

Be Twinkle’s Facebook friend for plenty of eye candy and arching wit. 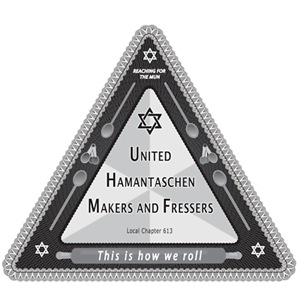 Look, Purim is coming in a coupla weeks and you know what that means: 12-hour days in the kitchen spreading poppyseed paste on six thousand pointy little cookies. Don’t the hard-working balabustas deserve a few perks, like fresh coffee in the kitchen and a ban on aprons that make a girl look hippy?

I’m not sure what a Jewish Teamster looks like, but many thanks to the new Jewnion Label for organizing some new shmatas for the Yenta to share. Say, can you folks help me negotiate some blogger’s benefits?

Be sure to rise up and join the International Order of Challah Makers and the mighty n’ able Union of Jewish Handywomen (or Handymen, as it were.) 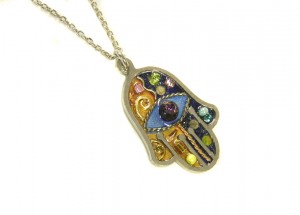 I’m totally loving this hamsa necklace by Israeli artist Seeka. Protection + sweet style = much lovelier than chicken swinging…Not that I’m superstitious, but I’ll take all the help I can get these days.

They’re carried locally (and affordably!) by Chroma Gallery on Barnard Street, and it’s always an awesome surprise to see Judaica for sale in downtown Savannah amongst the kitsch and candy.

And here’s a shout-out to my homegirl Steph for turning me on to another new favorite thing: The Red Box is a network of vending machines for DVDs – cheap, easy and always open! Hollywood Video and their “deals” can kiss my tuchus!

We rented “Defiance” outside Walgreen’s last night – the Bielski Brothers’ tale of Nazi resistance in the Belarussian forest haunted my dreams last night. Made me wonder if EYM and I should shore up our survival skills so we could move all the JEA Yentas out to the swamps of Wassaw Island if there ever came a reason…

The Mormon Church’s practice of “baptizing” the names of Jews killed in the Holocaust first came to my attention in 2005 and really, I’ve tried to be diplomatic about it.

These folks think it’s a good thing to “save” the deceased so they can hang in the holy afterworld, but rather than keeping to their own dead relatives, they thought it’d be fun to invite everyone to the Mormon afterparty. Supposedly LDS leaders ordered a “cease and desist” of this unbelievably misguided, disrespectful and yes, blasphemous nonsense. Yet still, it continues:

Since 2005, ongoing monitoring of the database by an independent Salt Lake City-based researcher shows both resubmissions and new entries of names of Dutch, Greek, Polish and Italian Jews. The researcher Helen Radkey, who has done contract work for the Holocaust group, said her research suggests that lists of Holocaust victims obtained from camp and government records are being dumped into the database. She said she has seen and recorded a sampling of several thousand entries that indicate Mormon religious rites, including baptisms, had been conducted for these Holocaust victims, some as recently as July.

Ernest Michel, honorary chairman of the American Gathering of Holocaust Survivors, held a press conference on Monday that ran in dozens of news outlets, but none of those might say it as plainly as I’m gonna say it now:

Hey Mormons: Our dead relatives don’t need your stinkin’ Jesus. They don’t want to play basketball or braid each other’s hair or sit around and drink caffiene-free Coke with you in Heaven. God loves us Jews no matter what (check your Pentecost!) so you can keep your “good intentions” to yourselves. Got it, beeotches? 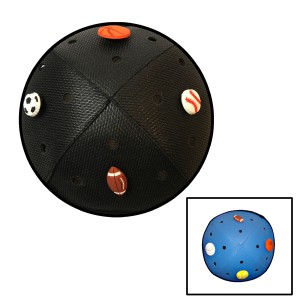 Y’all already know how I feel about Crocs. And there are plenty more like me, in spite of their hideous ubiquity. In fact, the I Hate Crocs blog is my new favorite home.

But now the Croc lovers have gone and made it personal. This is the “Kroc Kippah,” which someone at PopJudaica.com thinks is amusing enough to sell. Maybe you think it’s amusing enough to buy. But if you’re wearing it and sitting in front of me at synagogue, so help me I WILL snatch it off your head and fling it like a cold latke from hell onto the bima.

Tip thanks to Meredith at ModernJewishMom with my sincerest apologies, because she likes it.

I’m thinking about all the smaller chozzerai I could stuff into this adorable pita purse:

My iPod and some lunch money, an extra pair of socks and a small notebook, a Tupperware container of babaganoush made from the dozens of eggplants El Yenta Man’s got growing in the “backyarden” (that’s Little Yenta-ese for the fertile plot of land behind our house.)

Come to think of it, if I threw in some of the other happy veggies, I’d have a pita pocket full of purple peppers.

A little something for all the sinners from Thorn Busch.

Although already versed in New Testament scripture from my Mormon neighbors, I didn’t hear about the Rapture (that special moment when Jesus comes back with lollipops to take away all the believers in a big balloon) until my parents sent me to a non-denominational summer camp in Pinetop, Arizona.

One night after the fire circle, we 8 year-olds we sitting around our bunk telling scary stories. Ashley Winter, not to be outdone by my one-armed hatchet man-hiding-in-the-bathroom tale, informed all of us that while the gays, Jews and Satan-worshippers were going straight to hell, she and the rest of the good Christians were going to fly up to Heaven. There will be no warning, intoned blond Ashley of the ski-sloped nose. Everyone will just be *poof*! gone.

The next morning I woke at dawn. It was eerily silent, no breathing or snoring sounds (in spite of the Gidget-y perfectness Ashley’s nose, it was not so efficient in the exhalation department.) I looked over at the next bed, which appeared to be only a pile of covers. I sat up and surveyed the room in the shadowy light. All the beds were empty! Jesus had come in the middle of the night and taken everyone but the little Jewish girl with the potty mouth! Looking back, I should have been pretty happy because it meant I could get to the showers first and have at least five minutes of hot water, but instead I started screaming.

Suddenly, the sleeping bags came alive, which I mistook for the heathen-eating demons Ashley described in great detail. My counselors placated me with hot chocolate and told Ashley to keep her beliefs to herself, but I was psychically scarred, people.

My folks decided to send me to Jewish camp after that.

Wish I’d been sporting this on the way to work, when the methhead in the Chevy Impala yarming into her pay-in-advance cell phone decided one lane was not enough for her and that weaving in between two or three was the fastest way to her destination. Without it, I had to resort to my trusty middle finger.

From Kosher Kafe. It also comes in a thong version, which changes the context considerably.