I’ve been neglecting my Yenta duties since I’ve added the chapeau of “Office Manager” for El Yenta’s Man’s new venture to my arsenal of hats. I’m working hard to set him up for success, which means figuring out where to buy tri-fold paper towels, keeping sharp objects out of his way and not rolling my eyes every time he pretends to know how to use online bill pay.

Tell me, wives: If you’ve ever had to work for your husband, even temporarily, how do you manage to not stab him in the face with the plastic spork that came with the takeout lunch you brought to him without being asked and then he complained there wasn’t enough mayo? Deep breaths, yes…

There’s also been more to handle in Yentaland:

Tuesday night, a trio of Ethiopian Israelis came through Savannah to present “Israel at Heart” programs at Savannah State University and the JEA. A few days before, Ben, the JEA program director, asked me to host all three for the night after their program. Ben is a very nice young man who does not have children. He wouldn’t understand that he should be slapped for asking a harried Jewish mother with no guest room to find beds and breakfast for three strangers on a school night. But because he was so polite about it and was willing to shave it down to just one Ethiopian Israeli if someone hosted the others, I agreed with a grumble. He also used the magic words that key right into every Jewish mother’s heart: “It’s a mitzvah.”

Great, just what I needed. A guilt trip from God. But the “mitzvah card” always works on me. I mean, if Abraham and Sarah could wash people’s stinky feet after they’ve traveled through the desert, surely I could throw some sheets on the futon and scare up an extra cup of coffee in the morning for a young person who’s educating folks about Israel. 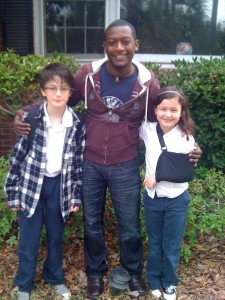 Tomer Marsha turned out to be a lovely houseguest for the few hours he was here, and the children adored him. He didn’t even mention all the dog hair on the futon.

I sort of forgot to mention it to El Yenta Man, who stayed out late at a Fat Tuesday party (what Jew can resist a good Catholic throwdown?) and was preparing to leave at dawn for an early client when he scurried back into the bedroom and whispered “Did you know there’s a black man sleeping in the office?”

(Of course I had mentioned it, but I didn’t mention it the magical number of times it takes to stick in his brain without going over the amount threshold where he accuses me of nagging. Husband-wife communication is an inexact science.)

We didn’t attend the JEA lecture, and Tomer was happy to tell us about his upbringing near Tel Aviv over fresh chicken eggs and (too weak for Israelis) coffee. He was born during the weeks his parents risked their lives to emigrate from Ethiopia to Israel as part of the mass exodus the 80s—a sabra by the skin of his teeth. Though some Ethiopian families have had a difficult time melding into Israeli life, Tomer and his family planted roots and thrived. He grew up very religious but finds more meaning in the inclusive spirituality of many Israeli youth and now lives a secular life interning at a law office and enjoying the great big fun that is Tel Aviv.

The kids asked good questions, and the boy even showed off the Hebrew that he’s been learning from all the awesome Israeli shlichim (ambassadors) who spend a year in Savannah. I’m grateful that we had the opportunity to expand our awareness of the world, and the mitzvah was worth any inconvenience.

5 thoughts on “A Mitzvah in Yentaland”