Legendary cartoonist/lampoonist R. Crumb discusses the difficulty of drawing the Almighty for his latest comic work The Book Of Genesis
…maybe I’ll draw God as a black woman. But if you actually read the Old Testament he’s just an old, cranky Jewish patriarch. It’s a lot of fun doing Genesis, actually. It’s very visual. It’s lurid. Full of all kinds of crazy, weird things that will really surprise people.
Man, if the Pope has a problem with Harry Potter, we can’t wait to see how he reacts to this.
Ill. c/o http://www.suitelorraine.com.

So, look, we know we need to address the fact that we’ve misspelled “anti-Semitic” THREE times in the last week. We don’t know what our problem is; we think the shock treatments are making us stupider. Or maybe it’s the fact that we have every relative over the age of 50 visiting this week. Whatever the case, we will humbly consult our spellchecker henceforth. And get some better blogger software.
We know we’re dumb. But at least we’re not as dumb as this guy with the elephants.
Shabbat Shalom.

Our condolences to the Lieberman family, who lost their matriarch, Marcia Lieberman, last month at the age of 90. Connecticut Senator Joseph Lieberman has attracted media attention for the beard he has grown since his mother’s passing; his “scruffy” appearance raised a few eyebrows at a press conference last week until it became known that he was observing the Jewish tradition of shloshim (“thirty”), which prohibits shaving and other forms of personal grooming for thirty days after the burial of a loved one. (The family has already moved through first seven days of grieving at home, known as sitting shiva.)
Once upon a time in 2000, pundits made fun of Al Gore for his hairy mug; we hope this time the mouths-that-be will keep their bad beard jokes to themselves.
Photo c/o http://lieberman.senate.gov.

Our fascination with Southern Jewish culture has led us to a most disturbing, little-known event in American history:
In December of 1862, in the height of the Civil War, Union General Ulysses S. Grant issued General Order No. 11, commanding all Jews to be expelled from the Southern states of Kentucky, Tennessee and Mississippi, giving some long term residents just 24 hours notice.
Grant wrongly believed that Jews were controlling the black market in cotton, and while certain traders may have engaged in questionable business practices during the war, this blanket prejudice caused the American Jewish community to scream with indignation.
After staging protests in Cincinnati, New York, Philadelphia and St. Louis, Jewish merchants took their grievance all the way to Washington, where

President Abraham Lincoln immediately revoked the order on January 3, 1863, two days after the Emancipation Proclamation freed the slaves.
Lincoln, who “drew no distinction between Jew and Gentile” and would allow “no American to be wronged because of his religious affiliation” told Grant that to condemn a class is, to say the least, to wrong the good with the bad.
Now, we never heard a peep about this incident in public school history classes (what else aren’t they teaching us?) nor in Hebrew school. Sure, American Jews forgave Grant wholeheartedly (he garnered the Jewish vote to win the presidency in 1868) but to dismiss these blatant anti-Semetic history to the point of “lost” seems quite uncharacteristic of us. Even the Southern Jews we know, who grew up whistling Dixie and sported Confederate flag license plates, have never about General Order No. 11. You’d think Southerners, some of whom still bear enough of a grudge against Grant to refer to the Civil War as the “War of Northern Aggression” in certain circles, would be delighted to point out this blight on an otherwise stellar military political career.
Guess it proves that history is written by the winners.
Check out more at Jewish Virtual Library.

Even though Marcie Cohen Ferris’ Matzoh Ball Gumbo: Culinary Tales From the Jewish South won’t be released until the end of October, the cultural cookbook is already causing a stir: At least one lowcountry restaurant has based a special menu around Ferris’ recipes that she has collected from the unique traditions of Jewish communities from Memphis to Savannah.
Ferris, an anthropological historian at the University of South Carolina in Chapel Hill, chronicles how the Crisco saved Southern Jewish cooking and gets to the bottom of a mysterious Rosh Hashanah tradition called “hoppin’ john” (being only honorary Southern Jews ourselves, all we know is that involves peas.) Our shelves contain a good amount of Jewish cookbooks, but we’re looking forward to spicing up our kugel with cajun seasoning and learning how to prepare “sweet and sour shad.”
We’re mostly interested in the historical perspective on communities like Charleston (where the Jewish population exceeded that of NYC once upon a time) but we wish the publishers would have gotten it together to get Gumbo out before the High Holidays this year so we could abandon our tired ol’ brisket recipe.

Everyone gets confounded by temptation sometime. Comes in greeting cards, coffee mug and pillow forms too! From JewishFunnyBone.com.

We must admit that at first we found Poland’s new fascination with Jews creepy and uncomfortably ironic. Our bubbie might have an aneurysmkinehora! if she knew they’re dancing in the Krakow streets to klezmer these days, as she was driven from that country as a child just before Hitler moved in.
Her parents, our great-grandparents, settled in New York and here we are all the way across America, trying to imagine the terror and anger of being lucky enough to escape while the rest of the family perished.
It’s not a story that we like to drag out for company, but it inevitably informs a certain part of our personal Jewish identity.
We visited Poland in our post-college youth, where we toured Auschwitz and Bergen-Belsen, an experience so full of horrid impressions that we will spare you of them. But suffice it to say that when we read about a “Jewish Culture Festival” in a country that once was home to 3 million Jews and now has a population about the size of our two-stoplight California town, we shudder a little. As recently as 1992, Polish opinion was still fantastically anti-Semetic in spite of the fact that with a mere 10,000 left in Poland, nobody had ever met one.
Lately the Poles have become interested in what they believe to be a “dead” culture, because even though there are plenty of us thriving around the world, there will never again be the particular richness of Jewish Poland in the Renaissance and Baroque periods of history.
After reading Jeff Jacoby’s article, we sense that there is a sincere curiosity behind “the warm feeling” (as one woman calls it) of knowing more about their country’s lost history. And somebody is doing an excellent job of marketing Jewish history to Poland.
We’re imagining every single one of Krakow’s 200 Jews churning out press releases, printing glossy programs and scheduling tours of the restored Jewish quarter to produce the very professional, highly attended The Krakow Jewish Culture Festival, which just passed its fifteenth year. Instead on concentrating on the tragedy of the Holocaust, it offers Yiddish-singing workshops, klezmer jams and introductions to the “weird and wonderful world of Jewish cuisine.” The final event is a late-night dance jam that takes over Szeroka (“wide”) Street and looks like Jewlapalooza with that crazy inflated menorah.
They make think we’re dead, but at least they know we like to party.
Photos c/o http://krakow.zaprasza.net/fkz/koncert1999.html, there’s plenty more. 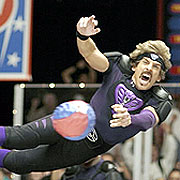 Another killer Kosher Top Ten from Bangitout: Top Ten Things About Camp We Loved to Believe In.
We’d like to add The Gaga bully: Every year we hoped that the bruises and smacks we sustained while playing this brutal form of Israeli dodgeball would make us better athletes, or least teach us not cry when we got hit in the face. But there was always the mean kid, the who would throw with enough force at your nine year-old ankles to shoot dust up your nose just for the sadistic sport of it, and we respected him.
We still cry when we get hit in the face.
(Since a photo of a gaga pit was nowhere to be found, we got a photo of a Jew playing dodgeball. Fair enough? c/o USA Today.)

The Guinness Book of World Records has bestowed The World’s Oldest Living Couple title on Dachau survivor Herman Brown, 105, and his wife, Magda, 100. Some couples have been married longer, and some of the indviduals are older, but the Brown’s “aggregate age” of 205 years and change combined with their 74-year union garnered them the distinction.
Magda’s take on the secret to their wedded bliss: “He is very easy going; I am the strong one. We never argued, we just had discussions.”
Of course, that’s her side of the story, but she’s sure Herman agrees.
The article mentions Herman’s arrest by the Nazis, but doesn’t mention whether Magda is Jewish or not. But really, after 74 years, could it matter?
(We couldn’t find a photo of Herman and Magda, so we posted this one of William and Claudia Ritchie, who held the title briefly in 2002. Maybe that’s why a story like this is so sweet; you know it will inevitably end soon.)

AP reports: Gov. Rick Perry has apologized for inviting a messianic Jewish leader to represent the Jewish faith at a bill signing where the man delivered a prayer in the name of Jesus.
Full story.
We don’t know which it more disturbingthe fact that a messianic meshuggeneh was mistaken for a true Jew or that the state of Texas now limits a woman’s right to choose (a distinctively right-wing Christian agenda.)
No matter what everyone’s personal opinion is, the Jews have enough tsuris without getting into that kind of legislation. Right???
Photo c/o UTA Magazine.